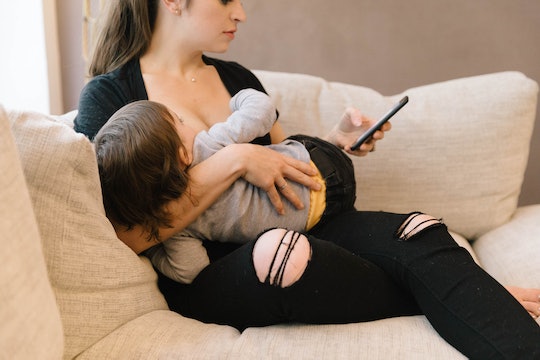 How To Keep It Together During The First Year Of Parenting, According To Experts

Parenting has never been easy, but it's never been quite as complicated as it is now. In our present-day culture, the word "parent" itself has evolved from a simple noun to a verb with countless subtexts and nuances. “It’s a consequence of the way we’ve changed our view of children’s upbringing,” said psychotherapist Esther Perel to an audience of new parents. In fact, as she explained, the whole conversation around modern parenthood has shifted from one of nature to one of culture.

Because of this gradual expansion of what it means to be a parent and to parent, the personal shift from childless adult to parent feels all the more seismic, especially during the first year after your child is born. First-year parents are plagued with some universal questions: Am I doing this right? Am I messing it up? Are other parents going through the same thing? Plum Organics knows this struggle better than anyone, and in an effort to help parents through the challenges and triumphs of new parenthood, they've launched a campaign called Keeping It Together. It's all about bringing you expert perspectives, true stories, and an unfiltered look into modern parenting by focusing on the transition to parenthood through identity, relationships and career — and honestly, it's a refreshing perspective that's long overdue.

To learn more about their campaign, we sat in on a panel featuring Perel and reproductive psychiatrist Dr. Alexandra Sacks as they offered up their best tips for parents on keeping it together during year one. Here's are some of the most vital takeaways we learned from these experts:

Recognize That New Parenthood Is Really Similar To Adolescence

As it turns out, the transition from being a constantly doted-on pregnant woman to parenthood isn't emotionally that far off from the transition from kid to teen, according to Sacks. She refers to this life-altering transition as "matrescence" — a term that combines the biological reality of motherhood with the inherent awkwardness of adolescence.

Immediately after birth, the focus tends to shift from mom to baby, leading those around them to forget that new moms have physical and psychological needs of their own. "A lot of patients come to me wondering if they have postpartum depression, and when I explain 'matrescence' they feel tremendously relieved," says Sacks, who notes that when moms share this term with their friends, it often leads to more honest, open conversations about modern motherhood.

Get this: A Plum Organics survey found that 56 percent of new parents admit to staying in the bathroom longer than needed simply to hide and evade responsibility. If that doesn't signal a need for a better parent/life balance, I don't know what does.

Talk To Your Partner About How Each Of You Were Raised

Fun fact: You and your partner will have different hormonal responses to hearing your kid cry, and it all has to do with how each of you were raised, says Sacks. For example, if you were comforted when you cried as a baby, your response to your baby's cry will be totally different from your partner's, who may not have been comforted as often. Sacks suggests that before you're in the heat of the moment arguing about whose parenting method is better, have a conversation with your partner about how each of you were raised. The goal is to understand that even though you'll inherently have different preferences for taking care of your baby, the two of you can still communicate about your shared preferences.

Ask a hundred moms what their idea of a "perfect" parent is and you'll get a hundred different answers. Sacks encourages new parents to not only accept their failures throughout parenthood, but to seize them as teachable moments for the wellbeing of your kid.

“We need to model for our children that we are dynamic people who enjoy all parts of life," says Sacks, while reminding that letting your kids see you fail actually works out in their favor. "It’s good to model to your kids that you don’t have to be perfect. It sends an important lesson: it’s OK to be you."

Be Honest With Other Parents About How It's Going

Let's take this opportunity to shift the conversation away from the idea of perfect parenting and onto the idea of keeping it real. Perel recommends connecting with your parenting role models, or fellow new parents who seem to have not totally lost themselves in parenthood. "When people have children, you become isolated. It’s always 'what am I doing wrong,' because the problem becomes privatized," says Perel. By speaking candidly with other parents about the realities of parenthood, you'll begin to understand that the ups and downs you experience are a lot more universal than you may have realized.

This article was originally published on April 10, 2018