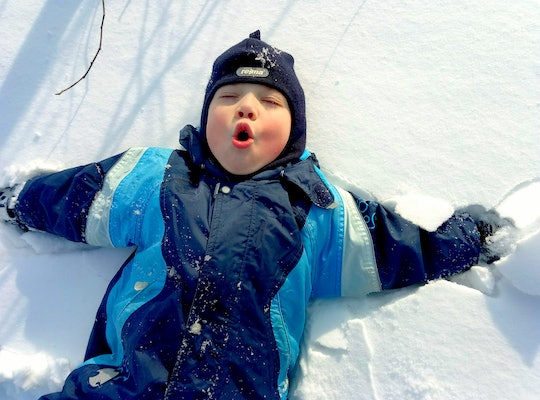 The calendar may say that it’s almost time for spring weather, but Mother Nature clearly has other plans. The National Weather Service is predicting the heaviest snowstorm of the winter season to hit most of the northeastern United States early this week, with up to two feet of snow expected in several major cities. But the weather gurus are predicting more than just a simple snow day. The combination of heavy snow and high winds expected late Monday means that New York and most of New England could wake up to blizzard conditions on Tuesday morning, according to a statement issued by the weather service. And while parents might feel comfortable handling a normal snow day, keeping kids safe in a blizzard may sound a bit more daunting. The good news is that most of the tried-and-true cold weather rules still apply.

Dubbed Winter Storm Stella, the nor’easter is expected to intensify between Monday night and Tuesday morning. And while it can be difficult to predict exactly how much snow each city will get, The New York Times reported that New Yorkers should expect somewhere between 12 and 23 inches of snow; Washington, D.C. residents could get as many as eight inches according to that same report.

So, what does that mean for kids looking to enjoy this last bit of winter weather? Save The Children and the Centers for Disease Control have several tips for helping families to stay safe in extreme winter weather and other disaster situations. Basically, parents should exercise a bit of extra caution to keep kids warm and safe. Here are a few highlights:

Layer For Warmth If You Have To Go Out

Getting little ones bundled in layers and layers of breathable fabrics can be a hassle, for sure. But going out in the wind and wetness without proper clothing can lead to frostbite, according to the CDC website. Babies are a particular concern, since they can’t regulate body temperatures as easily as adults. So, the CDC urges parents to avoid allowing infants to sleep in cold rooms and suggests dressing babies in warmer clothing indoors as well as when going outside.

Just because a road is closed doesn’t mean it’s free from danger, warns Save the Children. Snowbanks and icy conditions can make it more difficult to see and react to little ones on residential streets.

Be Extra Careful If The Power Goes Out

Fireplaces, wood stoves, and generators bring a new set of safety concerns, according to the CDC. The agency warns against using space heaters near anything that can catch fire and leaving them unattended when children are nearby. Also, battery-powered flashlights and lanterns are recommended over candles. Finally, the CDC has published several tips for keeping carbon monoxide detectors and smoke alarms inspected and ready for winter weather.

If You Have To Drive, Pack The Essentials

Many cities are already asking motorists to stay off the roads in preparation for the winter storm. Still, it usually makes sense to prepare the family car in case of an emergency. The CDC recommends keeping essentials like blankets, first aid kits, canned or dried foods, flashlights and kitty litter (for traction!) in the car ahead of a winter storm. There’s a full checklist for car safety in winter on the agency website.

Really, the uncertainty that comes with a winter storm can be frustrating. But, Save the Children reminds parents that kids take their cues for handling things by how we react. Talking, playing games, and doing other family activities can help keep kids feeling safe and secure. There’s probably no better time to sip something warm, watch something fun, and listen out for the last thundersnow of the winter season.