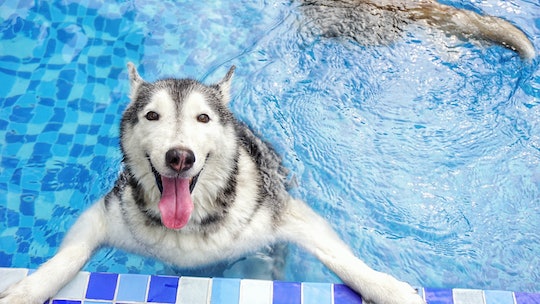 A dangerous heat wave is expected to send temperatures in two-thirds of the country soaring through this weekend, according to the National Weather Service. With temperatures are expected to creep into the high 90s and 100s in many cities, more than 70 million people are currently under heat watches, warnings, or advisories, the weather service has warned. But as you prepare to weather summer's latest heat wave, don't forget to safeguard your pets. There's a few important steps you can take to keep pets safe during the heat wave.

"With temperatures expected to exceed 90 degrees in large parts of the country, it is of the utmost importance that pet parents take measures to ensure their pets remain safe from heatstroke and other potentially deadly conditions," Amy Nichols, vice president of companion animals for the Humane Society of the United States, tells Romper.

While a good game of fetch outside or a nap in the sun are likely high on your pets' list of favorite summer activities, scorching hot days can be uncomfortable for even the most avid summer fan, furry friends included. Just like people, pets aren't immune to the heat and it's important to take precautions — for them and for you — during heat waves, like the one forecasted to hit this week.

The American Society for the Prevention of Cruelty to Animals (ASPCA) has warned owners that pets can quickly become dehydrated, especially in hot or humid weather. The ASPCA recommends limiting exercise and providing plenty of fresh, clean, cool water as well as a shaded area to rest away from the sun.

When exercise is necessary, Nichols recommends scheduling it for the early morning or evening when temperatures are likely to be at their coolest. In extremely hot weather, such as the upcoming heat wave, both the Humane Society of the United States and the ASPCA recommend bringing pets inside.

But heat isn't the only danger to watch out for, according to the Humane Society of the United States. "It's important to remember that it's not just the ambient temperature but also the humidity that can affect your pet," Dr. Barry Kellogg, VMD, of the Humane Society Veterinary Medical Association, said in a Humane Society of the United States blog post on summer safety. "Animals pant to evaporate moisture from their lungs, which takes heat away from their body. If the humidity is too high, they are unable to cool themselves, and their temperature will skyrocket to dangerous levels — very quickly."

Pet owners should pay close attention to their animals during heat waves and monitor them for signs of overheating, such as excessive panting, drooling, weakness, insensibility, vomiting, seizures, diarrhea, difficulty breathing, or increased heart rate or a body temperature higher than 104 degrees.

According to Nichols, pets that are very young or older are more susceptible to heat-related illnesses and should thus be monitored closely, especially when outdoors. The ASPCA, meanwhile, has noted that animals with flat faces, such as Pugs and Bulldogs or Persian and Scottish Fold cats, are unable to pant as effectively as other breeds, making them more at risk for heat stroke.

While keeping pets indoors or in the shade will help them stay cool, you can also provide a little extra help and comfort with cooling mats, vests, and bandannas designed especially for dogs and cats. Because pets don't cool down in the same ways humans do, these pet-specific products are likely more effective than a fan at helping Fido cool off. Paw protectors, also known as dog shoes, can help protect pets' sensitive foot pads from hot asphalt.

Heat wave or not, pets should never be left unattended in vehicles, even if you only plan to be gone for a minute. According to the Humane Society of the United States, within just 10 minutes the temperature inside a closed vehicle on a day when it's 85 degrees outside can easily hit 102 degrees. The ASPCA has also warned against leaving unscreened windows open in homes where pets reside as animals can fall or jump out.

According to CNN, half of the country's population is expected to see a week of high summer temperatures, with little relief at night. And with temperatures forecasted to be anywhere from the high 95s to 110, it's important for pet owners to take extra precautions to keep their furry friends safe and comfortable.