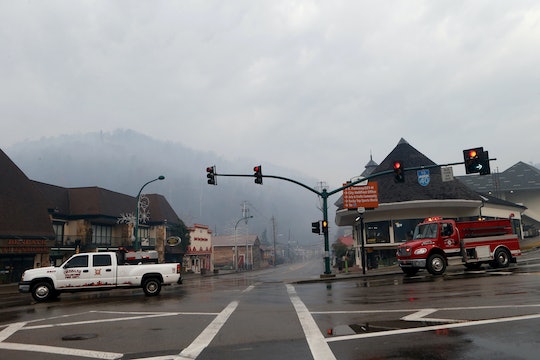 If Your Area Is Full Of Wildfires, Here's How To Keep That Smoke Out Of Your Home

Fire season in 2018 has been intense. My friends in California, Utah, and Oregon have been lamenting on social media about their fears that the fire might come too close, and also that the smoke and the air quality in the region is growing worse by the day. Many feel like there's nothing they can do about it, and many people don't know how to keep wildfire smoke out of the house so they can limit their exposure to its pervasive smell and soot. It's true that your options are limited, but they do exist. With the need to stay inside at an all-time high, it makes sense that you want the air in your home to be as clear as possible.

During this fire season alone, over 108 large fires have burned over 1.8 million acres of land in the United States, according to the National Interagency Fire Center. While this season has yet to reach the degree of devastation that occurred during the 2017 season, it has produced the largest single wildfire in California's history. And that fire is still burning. According to NASA, the dangerous particles from the smoke can travel hundreds, or even thousands of miles, so it's important to stay on top of your air quality reports, and do all you can to minimize your exposure by keeping your air filter clean and your windows closed.

Some of the population is more affected by the harmful smoke of the wildfires than others. According to the Centers for Disease Control and Prevention (CDC), people with cardiac or breathing conditions, older adults, and young children suffer from the most smoke-related challenges. If you or someone you're caring for falls into these categories, be aware that you need to be hyper-vigilant in trying to keep your home a "safe-air" zone. They suggest that especially in these cases, that you should have a "clean air room" that's free of fireplaces and doors, and has minimal windows. In your clean air room, you should have a portable HEPA air filter.

There are several strategies that you'll need to employ if you live in an area affected by wildfire smoke. According to the CDC, you need to have an action plan for when your air becomes problematic. This means that you should have the ability to close your windows, doors, and make sure they have a solid seal. You should also run your air conditioner, but keep the fresh air intake closed and the filter clean. If you don't have an air conditioner, you should find your locally designated clean air shelter when the air becomes stifling.

There are more ways you can protect your home than just closing it up. According to the Santa Barbara Air Pollution Control District, "During periods of poor air quality, avoid vacuuming and burning candles or incense." Vacuuming seems like a good thing, but not all vacuums are created equal, and they push out a lot of air. The website also noted that "during periods when outdoor air is cleaner, take advantage of the opportunity to air out your home." Which is yet another reason why you should stay on top of the air quality reports in your area.

If the smoke has already permeated your home, there are ways to get rid of the stink and funk. ServiceMasters, a cleaning service that serves fire dense areas, noted that you should set out dishes of baking soda around your home and use activated charcoal filters in your home. Also, if your clothes are smelling like a barbecue, give them a vinegar rinse in the laundry.

Fire season is dangerous and scary, and hopefully, it dies down sooner rather than later. Until then, keep your home sealed and stay indoors as much as possible.

More Like This
10 Fall Vegetables To Grow At Home
I’m A Mom Who Will Never Own A Home
Can Elderberry Help Prevent Illness In Kids? Doctors Weigh In
Endometriosis & Your Sex Life