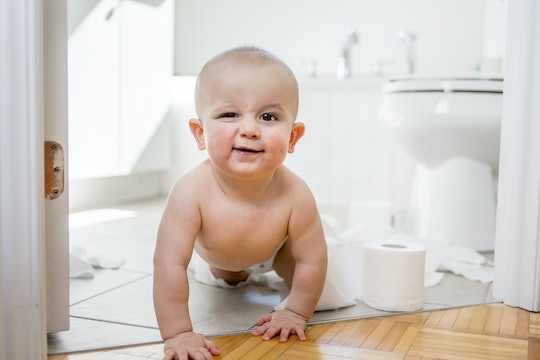 How To Keep Your Kid From Taking Off Their Diaper

There are certain inevitable aspects of parenting that you can't really avoid, no matter how hard you try.For some families, it's the fact that no matter what you do, your child is always varying degrees of naked, despite your best efforts to raise a clothed, socially acceptable child. But the age old question of how to keep your kid from taking off their diaper isn't easily answered. After all, kids have no sense of "social norms" and being naked all the time probably feels pretty darn nice.

I know this dilemma well, as my own 2-year-old refuses to wear any form of clothing at all and though it's never gotten to the point of stripping down in public, I'm well aware that it may come to that, if something doesn't change. I'll be the first to admit that the innocence of a child (and the adorableness of a baby butt) is one of the sweetest things in the world, but sometimes, a kid just needs to stay clothed. So I scoured the internet for tips and tricks from the "experts" on how to do just that.

According to PG Everyday, one foolproof way to ensure your child doesn't take off their diaper (especially at nap time or during the middle of the night) is to put their pajamas on backwards. As strange as it sounds, it will actually prevent them from unzipping or un-snapping their PJ's, keeping them clothed all night long.

One article from Mommy Shorts suggested that your child may be taking their diaper off because they're uncomfortable — either because it's the wrong size or they just hate the feeling of wetness (understandably so.) In cases like this, simply sizing up or down, or making sure to change their diaper more often may solve the problem. You can even get your child involved by asking them if they'd like to help, and making it clear that diaper changing time is the only time they're allowed to take it off. Allowing "naked time" during the day is also another great way to set boundaries that aren't impossible to work with.

Similarly, buying your child clothes that are more difficult to get off (like ones without buttons or zippers) will stay on longer, and prevent the diaper from ever coming off, according to Parents. The same article suggests that kids have various reason for doing this — ranging from seeking attention, to being uncomfortable, t0 testing your reaction — and while it can be frustrating, know that it's a phase that will pass with time. And no, you shouldn't consider joining a nudist colony for the sake of your child.

It may seem like a battle you're destined to loose, but putting a few boundaries in place, or simply changing up their wardrobe might be just what your child needs to make sure their diaper stays on.