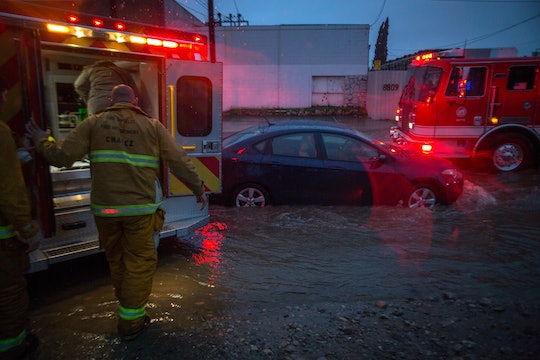 Here's How To Keep Kids Safe During Floods

As the result of intense rainfall that caused flash flooding and left about 100,000 people without power in Southern California over the weekend, at least five people have died. Getting trapped in a flooded vehicle, traffic accidents, drowning, and even electrocution from a felled power line accounted for their deaths, and illustrated the true, unavoidable danger of flash flooding. And with the heavy rainfall expected to surge again in the northern part of the state on Tuesday, parents across the country should be thinking about how to keep their kids safe during flash flooding, because preparation is essential.

In addition to the tragic deaths after the flooding that plagued Los Angeles and the surrounding areas, The Los Angeles Times reported that an 8-year-old and the child's mother were among the four people police rescued from the Santa Ana River. In another incident, the mother of a 12-year-old who temporarily went missing told authorities that she and her children had fallen into the water. The situation in California has sparked evacuations and and continued safety concerns as meteorologists predict that this "massive Pacific storm" will hit Northern California with a possible 10 additional inches of precipitation (rain started to fall there Saturday night, according to CNN).

So what can parents do to keep their children safe during what can seem like a dangerous and precarious time? Here are some tips that will increase the chances of a family's emerging from a flooding situation safely.

According to Save the Children, the first step to preparing kids to know what to do in a possible flooding situation is a conversation that should occur long before flooding is an imminent threat. Parents should talk about why floods occur with their kids, and familiarize themselves and their families with flood terminology like flood watch (flooding could happen) and flood warning (flooding is happening or will very soon). In the midst of either of these advisories it's important to stay informed of developments, including possible instructions for evacuation, using a NOAA Weather Radio or battery-powered device.

The American Red Cross recommends that families devise a Family Disaster Plan, in which each person has a role and knows in advance exactly what to do and how to work together in case of emergency. Talking this out and practicing it beforehand increases the likelihood that the plan will go as intended. The organization even provides a comprehensive template to jumpstart the process.

Before an evacuation order comes in, it's a good idea to pack a bag with essentials, including medications, so the family can respond quickly to authorities' requests to vacate a potentially dangerous area, according to National Geographic.

The Federal Emergency Management Agency (FEMA) has recommended that people not wait for instructions before moving to higher ground, The Denver Post reported. And no matter where families are in the midst of a flood, they should make every effort to keep children from the floodwaters. That's because there's a good chance that it will be dirty and carrying bacteria, as Save the Children notes. As always, be responsive to any instructions from authorities. And adults and children alike should avoid trying to walk in any moving water — even rushing floodwater as shallow as six inches can cause them to fall.

According to The Red Cross, those who stay in their homes should boil tap water before use to ensure they do not ingest potential contaminants. Stop doing this only when the relevant authorities communicate that it is safe to do so.

After the flood, there are still specific precautions to take before life can go back to normal. First, there will be a cleanup period, during which children's toys and belongings should be fully disinfected if they came into contact with floodwater — but kids' involvement with this process should be kept to a minimum. Also, it's important everyone in the family exercise caution during the period immediately following a flood, as floodwater can transform a landscape into a obstacle course of hidden dangers, according to The Denver Post. Roads and walkways may erode, so use a stick to test this. Also, debris can be slippery and obscure potential threats like broken bottles.

Unfortunately, the people of California have and must continue to adhere to these and other suggestions as they deal with the natural disasters wreaking havoc on their regions. The good news is that, with some preparations and knowledge, residents there — and across the globe — will be able to better protect their children and families going forward.