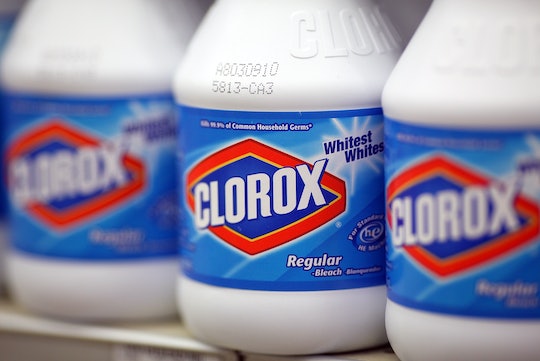 How To Kill Norovirus, Because It Can Come Back

If you've had the stomach flu recently, you know that it's not kidding around. Norovirus is a charming little virus that likes to come around in the winter, and it wreaks havoc by causing its human carriers plenty of stomach pain, nausea, vomiting, and diarrhea over the course of a couple of days. The worst part about norovirus is that getting it once isn't enough to give you immunity, and the virus is highly contagious — so if anyone in your family has had the bug, you'll want to know how to kill norovirus to keep it from infecting anyone else. (And also because of, you know, petty revenge.)

Luckily for those who want to keep their families safe — and those of us who simply want to kill the virus with fire after being subjected to its evil ways — there is a way to kill norovirus. According to NBC, bleach will kill norovirus effectively, and it should be used to clean surfaces after you've had a bout of the virus. Norovirus is also spread fecally, and the virus can survive regular laundry, so you'll want to use hot water and bleach to clean your laundry, as well. Chlorine bleach or hydrogen peroxide should get the job done.

Anyone who wants to avoid passing on the virus should take extra precautions as well. Unfortunately, hand sanitizer won't kill norovirus, so sufferers should use hot water and clean their hands for a minimum of thirty seconds, making sure to scrub under their nails. People remain contagious for up to two weeks after their symptoms disappear, so keeping things clean is important.

If you do get sick, make sure you're drinking plenty of water, resting, and staying home to avoid infecting others until you're better. Children and older adults who catch the bug can also get dehydrated more easily, so keep a careful eye on them and watch for signs of dehydration.

Norovirus is a pesky bug, but with a bit of bleach, a lot of hand washing, and a dose of luck, you and your family may just be able to skip out on the stomach flu this winter. Godspeed, friends.