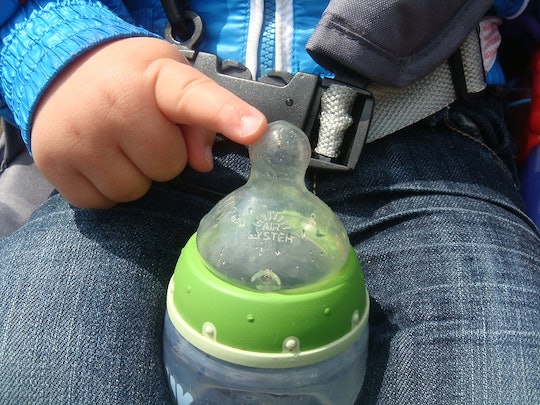 How To Know If Your Baby Water Was Recalled

After a report found possible signs of mold, a brand of baby water sold at Kroger Supermarkets was recalled. Gallons of "Comforts Purified Water with Fluoride" were removed from store shelves earlier this week after the grocery store chain was informed of the possible contamination in the water. Romper has reached out to Kroger and is awaiting a response. As a lot of parents use the filtered water — typically for mixing with formula and other foods — here’s what you need to know if you use this brand at home.

Update: A Kroger spokesperson told Romper in an email that the recalled water only involves product sold at Kroger stores in the following regions: Alabama; Michigan; North Carolina; Ohio (Columbus, Toledo, and southeast); South Carolina; Tennessee (Knoxville); Virginia; West Virginia; as well as its Fresh Eats stores in Ohio. The products will also have a "sell-by" date of May 18 and will be labeled with the Plant Code 51-4140.

"We take great pride in producing and selling food that is safe for our customers and their families," Kroger spokesperson Kristal Howard told Romper in an email. "Upon learning of an isolated customer complaint regarding our Comforts Purified Water with Fluoride (1 gallon), our manufacturing plant thoroughly investigated the issue. It was determined the product may contain mold."

The statement continued, "Because this product is largely consumed by infants and young children, we decided to notify our customers via receipt tape messages and phone calls out of an abundance of caution to prevent any further use of the product."

Earlier: While Kroger has locations nationwide — specifically 781 stores in 19 states, according to the company's website — the distribution area for this specific brand of baby water was reportedly delivered to South Carolina, Georgia, and eastern Alabama.

If you've purchased any amount of "Comforts Purified Water with Fluoride," Kroger reportedly said that customers were notified by automated phone calls and messages on cash register receipt messages, according to NBC News Chattanooga affiliate WRCBTV.

However, if you weren't contacted or aren't sure if you were, parents can also look for the UPC code 004126037597 on the gallon jugs, WRCBTV reported.

“The product may show signs of mold, according to the recall report,” a Kroger spokesman told The Atlanta Journal -Constitution. “Upon notification, we immediately removed all potentially affected items from store shelves and initiated our customer recall notification system.”

The statement continued, "Customer and food safety are Kroger’s top priorities, and as such we take every recall seriously."

Although it's not clear what type of mold was found in the brand of baby water, some aren't hazardous while others can be "an extremely toxic substance," according to LIVESTRONG. And it be can challenging to determine whether your child has ingested any mold as the symptoms are similar to other sicknesses.

"Most children aren’t going to have symptoms of mold ingestion," Dr. Claire McCarthy, a pediatrician at Boston Children’s Hospital, told Healthline. "If the child is having new, unusual symptoms or an unexplained rash, then it is worthwhile calling the doctor."

Recalls are always alarming, especially when the product in question is for your little one. So until this one has been totally resolved itself, parents can swap to another brand for the time being, or simply boil tap water for one minute, per the FDA's infant water guidelines.