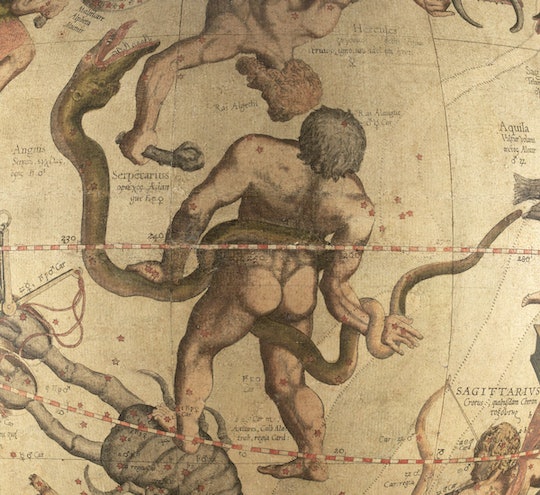 How To Know If Your Kid Is An Ophiucus, Because The Zodiac Has Changed

Those who pay a little attention to the news and a lot of attention to Babylonian mythology are rattled by the idea that NASA just changed the signs of everyone's astrological sign. While that's not exactly accurate, the truth is that the dates of the Zodiac calendar have changed, and there is a new sign, which means you or your kid might actually be an Ophiucus, or serpent bearer, and not the Sagittarius you once thought.

Let's start by clearing up the recent and popular misconception that NASA changed everyone's signs. To be blunt, NASA doesn't have time for that trifling nonsense. The rumor got started when NASA posted a story about the Zodiac constellations on its site for children called NASA Space Place, and Cosmopolitan UK responded with a hysterical interpretation of said post. "NASA have decided to update the astrological signs for the first time in 2,000 years," claimed Cosmo. "Nope, we definitely didn’t," NASA replied on Tumblr. What they actually did was explain the history behind the ancient belief that the stars control people's personalities, and detail how the positions of the Zodiac constellations have been interpreted incorrectly for the last 3,000 years. That being said, yeah, your sign has probably changed. Just don't drag NASA into it.

First of all, there have always been 13 constellations in the Zodiac. As the Earth revolves around the sun, it aligns with each of them. But 12 was a neater number, so the Babylonians chose to drop Ophiucus, possibly because he's a naked dude wrestling a snake, and nobody wants to identify with that. Furthermore, the constellations vary in size, meaning that the amount of time the sun and Earth are aligned with each one varies widely. But this isn't even new information; Time broke the story back in 2011 that the Minnesota Planetarium Society had redefined the Zodiac calendar. It just took Cosmo's frantic headline, coupled with the NASA name drop, for people to sit up and pay attention. The (not so) new calendar is as follows:

So in sum, almost nobody is the sign they thought they were, Scorpio is only a week long, and a good portion of you are now snake handlers. What does it mean? Nothing! But if you want to pretend, according to Time, Ophiuchus is modeled after Asklepios, son of Apollo, C-section baby, and healer. He was struck down by Zeus for his sick healing skills, and then reanimated by Apollo and elevated to God status. Basically, Ophiuchus is a zombie doctor. A zombie doctor who's into snakes. Fun! Just don't ask me how to pronounce his name.