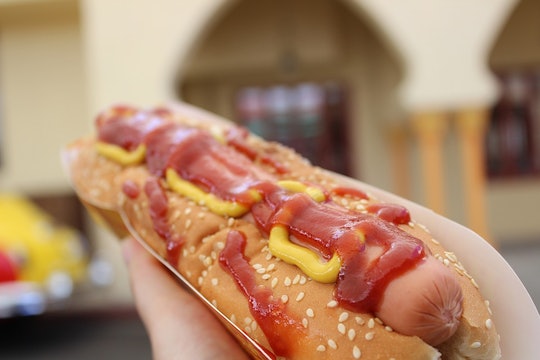 How To Know If Your Sabrett Hot Dogs Were Recalled…

More than 7 million pounds of Sabrett hot dogs and other sausages have been recalled after consumers reported that they had found pieces of bone or cartilage in the meat products, the U.S. Department of Agriculture's Food Safety and Inspection Service announced on Saturday. Whenever food is pulled from store shelves ― especially a favorite food among kids ― it’s a bit alarming and parents understandably want to know everything they can to ensure their little one’s appetites are safe. So before you toss out of everything in your kitchen, here’s how to know if your Sabrett hot dogs were recalled and what to do if they were.

Romper has reached out to Sabrett for comment regarding the recall and is awaiting a response.

According to the FSIS, the beef and pork hot dogs, sausages, and salami that are included in the recall ― distributed by brands' parent company, New York-based Marathon Enterprises Inc. ― were produced on numerous dates between March 17 and July 4.

If you purchased this brand recently, have a look at this product list compiled by the USDA ― which provides names, sell-by dates, as well as UPC codes ― to check whether your hot dogs or sausages were affected. Additionally, you can scroll through images of the product labels here to help determine whether you should throw out your hot dogs.

Sabrett products are sold at retail chains in 21 states and Washington, DC, including large stores like Target, Kroger, and Walmart.

According to the FSIS, there has been one reported "minor oral injury" after someone ate one of the hot dogs. Should you find you have a recalled product at home, consumers are advised to throw it out immediately and call Sabrett for a full refund at 1-800-722-7388. You can also apply online for a refund.

"Sabrett takes its responsibility to provide safe foods very seriously with a robust internal food safety program," the company said in a statement on its website, adding that it "voluntarily" recalled the products "in an abundance of caution."

The statement continued: "Sabrett deeply regrets any concern or inconvenience this has caused its loyal customers. Sabrett is working closely with USDA to effectively communicate to its customers with regards to this recall and to assure those customers that the recalled products are no longer in stores."

As CNN reported, some hot dogs and sausages were sold under other retail and brand names, such as Papay King, 1906 Premium, Western Beef, and Stew Leonard's. The recall also includes hot dogs and salami sold under the names Nathan's Private Label and Katz's Delicatessen.

New Yorkers and visitors to the Big Apple should be extra mindful when grabbing a quick bite as Sabrett brand hot dogs are often sold by street vendors, which can be identified by blue and yellow striped Sabrett umbrellas, according to CNN.

This FSIS considers this a Class 1 recall, deeming it a "health hazard situation where there is a reasonable probability that the use of the product will cause serious, adverse health consequences or death." That being the case, parents should be extra vigilant when selecting their kids' hot dogs at the supermarket. Or, to play it safe for the time being, just stick to chicken nuggets for a little while.