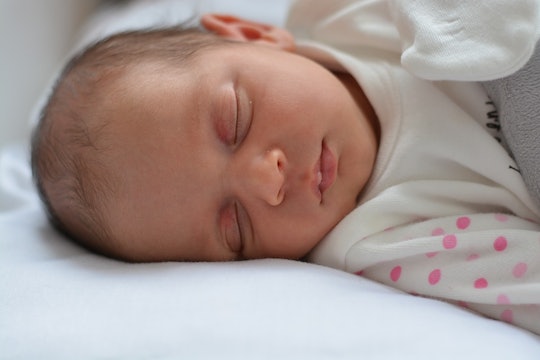 How To Know When Your Baby Is Sleeping Too Much

More often than not, a new parent's most common worry is that their baby isn't sleeping enough. However, because there's no consistency to parenting struggles, some babies fall on the opposite end of the spectrum and sleep too much. You've probably heard the phrase "never wake a sleeping baby," and in most cases that's true. In certain cases, however, a baby may be oversleeping, as strange as that sounds. Luckily, how to know when your baby is sleeping too much isn't as difficult as you might think. Keep in mind that there is a wide range of what is considered "normal" sleep for babies. Some babies are born amazing sleepers and others don't sleep through the night for years (yes, years.)

Knowing how much sleep your baby needs will largely depend on how old they are and how often they're feeding. According to the Baby Sleep Site, a newborn should sleep for the majority of the day. Unless they literally never wake up to eat, they're probably sleeping as much as they need to. Most newborns will sleep from 14 to 18 hours a day or more, waking for only a half hour or so at a time to eat. Some newborns struggle with night/day confusion, waking much more frequently during the night than during the day.

The Baby Sleep Site suggests that if you think your baby may be napping too long during the day (and sabotaging their nighttime sleep while they're at it) it's OK to wake them up a bit early. If newborns sleep much more than the "average" amount of sleep, they could have a medical condition causing them to be extra drowsy. Healthline noted that jaundice, infections, and other medical procedures like circumcision and vaccinations can make your baby sleepier than normal. Be sure to check with your pediatrician to make sure they're gaining enough weight.

As your baby gets older, they'll sleep a bit less during the day, and that's totally normal. Kids Health noted that babies four months old to about seven months sleep around 14 hours per day including two or three daytime naps. If you suspect your baby is sleeping more than they need to be, cut their naps a bit shorter, or try laying them down later at night.