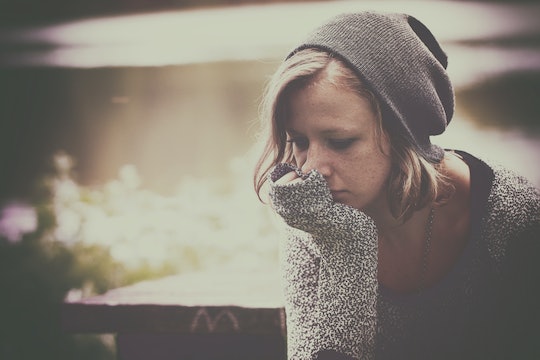 How To Leave An Emotionally Abusive Relationship, According To A Professional

One of the first steps to take in leaving an emotionally abusive relationship is to seek out support. "Whether you turn to a trusted friend or family member first, or you choose to seek out help by way of a counselor or therapist, seeking out support should be the first thing you do in order to leave your current relationship," Graham says. She advises seeking support before you do anything else, so that you not only have someone to lean on during this tumultuous time, but so that you are held accountable. "It's too easy for those who have been emotionally abused to talk themselves out of leaving the relationship," says Graham. "If you've told someone, you're more likely to be held accountable, and to be supported and encouraged during this otherwise very lonely time."

Once you've sought out support, it will be easier for you to begin to shift the control in your relationship. Too often in emotionally abusive relationship, the abuser wields all the control. "Emotional abusers use their power to make the abused feel powerless," Graham says. "By using manipulating you, by way of verbal abuse, gaslighting, and more, abusers gain and maintain control in the relationship." Though taking back control can seem impossible to you if you're in an emotionally abusive relationship, after you've sought out support, it becomes more accessible. "With support, you begin to see that you are not powerless, and that you are much more than what your partner attempts to make of you," says Graham. According to Graham, taking back control starts small, with the help of others, but also with daily practice. She recommends creating a series of positive self-affirmations you can use on a daily basis to help to lift you up, and deny the power of your partner's words. "Believing in yourself is a powerful affirmation," says Graham. "The more you believe in yourself, and less in your partner's abuse, the easier it will be for you to take back control of your own narrative, and begin to steer it in a healthier direction."

"Cutting ties with your abuser can be scary," says Graham. "Your abuser counts on keeping you so far down that you don't have the courage, the strength, or the initiative to leave the relationship." But according to Graham, now that you've surrounded yourself with support, and positive affirmations, you are well equipped to end things with your abuser. If you're afraid that cutting ties will lead to further domestic violence, reaching out to a supporter to not only help you through, but to be present when you cut ties, is a good idea." Once you cut ties with your abuser, Graham says to keep the door closed on your relationship. "It can be hard to cut someone you love out of your life, but in the search for a healthy relationship, and a healthy life, you have no room for emotional abuse or those who practice it in your life," says Graham. If you feel yourself doubting your ability to cut ties, or falling back into your relationship, seek out help from one of your supporters, or a counselor, to prevent yourself from opening the door on a negative relationship again.

Focus On Self Care

In the aftermath of an emotionally abusive relationship, focusing on self care is extremely important to get you back on your feet. "Take time to nurture yourself," says Graham. "You've been faced with enough negativity, and you need to focus on things that make you feel good about yourself in order to heal." Graham says this can be anything from running yourself a bath at the end of the day, to making plans with your friends, to taking a vacation you've always wanted to take. "There are many levels of self care out there," Graham says. She recommends keeping up your self-affirmations as you heal from your relationship, as the feelings your partner instilled in you will not disappear when the relationship ends. "That emotional abuse does not leave your system easily," says Graham. "In order to exorcise it from your life, you'll need to practice self-love, surrounding yourself with support, and positive thinking every day."

If you think you may be suffering from emotional abuse, take the time to seek out resources, such as this abuse checklist by Women's Law, or reach out to the National Domestic Abuse Hotline.