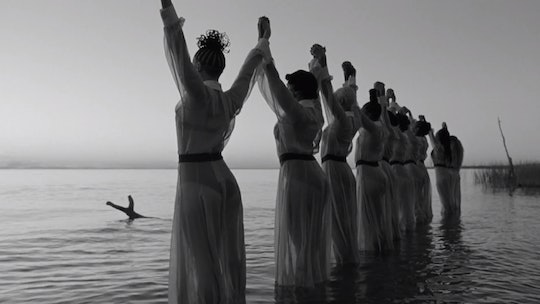 How To Listen To Beyonce's New Album, Because It's An Absolute Necessity

Rumors were rampant all month that pop superstar Beyoncé would soon be releasing her album—and, at long last, everyone's collective prayers and wishes have been answered. Now that Lemonade has finally dropped (in collaboration with a magnificent 1-hour musical film on HBO, no less), it's pretty much a necessity to know how to listen to Beyoncé's new album, lest you soon be the only person 'round the proverbial water cooler ignorant of the ins and outs of Lemonade (and Beyoncé's) genius.

Turns out, there are a couple ways to access Lemonade. In a report on Sunday night, The New York Times announced that Beyoncé's latest album would be available on iTunes, starting at midnight, or 12 a.m. ET. If you're not an iTunes user, however there are still other ways to listen in on Bey's newest collection, before it leaves HBO for good.

Fans will be also be able to access Lemonade through Tidal, a subscription music streaming service that's the exclusive venue for singles and albums from music superstars like Arcade Fire, Lil Wayne, Rihanna, and, of course, Beyoncé herself. A Tidal subscription will set you back either $9.99 or $19.99 a month, according to Tidal's website, with the higher price tag corresponding to "the added benefit of high-fidelity sound."

For a generation accustomed to the free-of-charge offerings available at streaming services like Spotify, the monthly fee can be a hard pill to swallow, but it's all in the interest of, you know, actually paying artists for their hard work. Tidal is co-owned by the likes of Jay-Z, Alicia Keys, and Madonna, under a unique business model of an "artist-owned global music and entertainment platform," according to The Guardian.

In a 2015 interview with Billboard, rapper Jay-Z, Beyoncé's husband, explained why paid subscription services are important in today's music scene. “People are not respecting the music, and [are] devaluing it and devaluing what it really means," he said. "People really feel like music is free, but will pay $6 for water."

With that in mind, perhaps the $9.99 price tag for Tidal's services doesn't seem so egregious. After all, it gives subscribers immediate access to an album so eagerly anticipated that one Twitter user said he would "sell his soul" if it meant the album's release.

For those of you who simply can not or will not subscribe to Tidal and prefer not to have an iTunes account, there's always the option of viewing individual singles from the album on YouTube. Beyoncé's first Lemonade single, Formation, was released on February 6, and was immediately accessible through YouTube—though the audio version was initially only available through Tidal.

According to a recent editorial at CNET, Lemonade's exclusive first release through Tidal (where it debuted on Saturday night, in tandem with Beyoncé's hour-long HBO music film) just might be the greatest hope for Tidal's future. Despite the services star power, it's trailing "significantly" behind both Apple Music and Spotify in terms of subscription numbers."Tidal's troubles could be instantly reversed if Beyoncé makes the music service the exclusive home of her next album," wrote music columnist Xiomara Blanco, adding,

And why not? If you're a popular superstar who owns an unpopular streaming music service and your highly anticipated new album is (maybe) about to drop, wouldn't you use the new record as leverage to help your flailing business?

At a time like this, though, where we stream it, why we stream it, and how we stream it all seem unimportant — what matters, in the end, is that Queen Bey's highly-anticipated and genius album Lemonade is finally here.