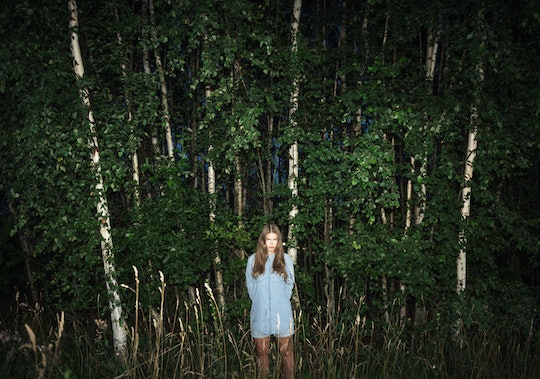 And now, for the moment at hand, where Haely commits a foul against womanhood and spends her evening lost in the woods. (Co-written by Sam and Haely)

Haely: My husband was asked to be in the wedding of a high school friend, and I happily obliged, knowing we could foist our offspring to the grandparents and have an entire night alone at an intimate mountain wedding. Plus, I’d take any excuse to escape to celebrate (read: nap alone in a cabin).

Just us, nature, and a little cabin nestled between the aspens. Maybe the morning after, we’d cuddle up with a cup of Folgers. MAYBE WE’D FINALLY HAVE SEX. Maybe we’d get up, eat a waffle, then go back to sleep. With an entire night to ourselves, anything was possible.

The log cabins, each rustic but perfect, were scattered around the grounds, looking like a summer camp for people who have opinions on bitcoin and are into ayahuasca — the bride had offered us her cabin for free: cabin A. I dropped my husband off to “get ready” with the guys, which was obviously code for day drinking. No man needs more than 15 minutes to get ready but I was down for it, as it meant some serious alone time. With my latest self-help book in hand and having donned my semi-formal athleisurewear, I had at least three hours of nowhere to be. Hell yeah.

Heading toward cabin A, I noticed a flurry of bridesmaids milling around. I didn’t know a soul except the bride (I had a closer relationship with my Whole Foods checker), so I entered and politely greeted the strangers in shapewear, hoping to get some clarity.

Bras, eyelashes, and Larabars everywhere: I must be in the wrong place, I thought. This was the bridal party room where you eat lukewarm sandwiches for roughly 14 hours and repeat “YOU LOOK AMAAAAZING I THINK I’M GOING TO CRY” till you’re so parched inside that not a single tear is left for the father of the bride speech.

I found the bride and told her congratulations also asked why are all these people in my cabin (“Am I in the right cabin” is how I played it). I was! She was giving us her room for the wedding night, but didn’t bother to tell us about the part where the bridal party would be getting ready there. Riiight. I took a deep breath and accepted the reality. There would be no rest for my tired postpartum bones, no place to sit and read, and absolutely no masturbating. Whatever it’s fine. Totally fine. Everything is cool. BE COOL HAELY BE COOL.

I mustered a smile and asked where to put my suitcase. Chatting just the right amount, I overheard that there were two pregnant bridesmaids. No one was particularly friendly and I felt even more alone trying to connect to the group of tight-knit friends now sharing “my” cabin, so I took myself off to the bedroom. While unzipping my suitcase, a bridesmaid walked in. Ah ha! One of the pregnant bridesmaids. Finally, a moment to connect with someone. Anyone. YAYYY.

The trees stopped blowing. The wind died instantly. Every animal in the forest stood still in horror and her face seemed to be buffering as I waited for a response.

I might have stopped there but, clinging to very small chance she perhaps didn’t hear, I raised my voice and clarified. “Oh I just asked how far along…”

I faded off realizing I had made a very big mistake. Her pupils were licked with the fire of a thousand flames. If she could turn me into a frog, this would be the moment.

I couldn’t tell you exactly what happened next. I blacked out. Spinning out into a deep, dark hole of negative self talk, my internal voice fired off a barrage of degrading remarks: “WHAT IS WRONG WITH YOU / WHERE IS YOUR FILTER / HOW COULD YOU SAY THAT? / NEVER ASK A WOMAN IF SHE IS PREGNANT UNLESS SHE IS ACTUALLY CROWNING.”

I knew I must flee into the woods, away from all human contact.

It’s the single moment as a mom (and a woman) you hope will never happen to you and there is absolutely nothing you can say to take it back: you’ve just suggested that the shape of someone’s body can only be explained as an otherworldly miracle. She stormed out into the main room where the bride and her gaggle of maids stood in a flying V. They stared me down.

Well, that’s one way to enter a wedding where you know absolutely no one. Who wants to party now?!

Must. Leave. Immediately. But where? I couldn’t stay in the cabin. I was no longer welcome in the only place I had to go. Resolving to keep a low profile until the wedding began, I knew I must flee into the woods, away from all human contact. Like Bear Grylls in heels, I set out determined to build shelter, forage for edible pinecones, and hide beneath a mylar blanket until the wedding.

I sobbed on a stump for a solid 30 minutes. Found some horses. Read a chapter of the book I’ve been reading over and over because it refused to sink in. I hit my vape hoping it would soften the sharp edges but it only intensified all the feels. I sobbed some more and realized the wedding was starting. Sh*t.

I found one of the single seats left near the front, feeling lonelier and more exposed than ever— praying for someone, anyone, to talk to. An outdoorsy girl in a Northface jacket with bright eyes plopped down next to me. FINALLY a familiar(ish) face. We met the night before and she was also rolling solo for the wedding portion, with her boyfriend as a fellow groomsman.

Desperately seeking a confidante to help me navigate this dumpster fire, I divulged everything. I had to. And like Thelma and Louise, we devised an infallible plan.

As the ceremony proceeded, I scanned for the bridesmaid I had offended. Where was she? The growing guilt consumed me and I worried she was too upset to walk down the aisle. Finally, she emerged right before the bride. Which only meant one thing. Maid. Of. Honor. This made it all even worse.

Annnnd back to my stump in the woods to cry a little more.

I avoided the entire bridal party, feeling scared to be in public for fear there was a target on my back. When we arrived in the reception hall and found our seats, my new gal pal came over to me to report one urgent fact: the MOH was sitting at our table. DIRECTLY ACROSS FROM ME. Not even a few feet away where your eyeline won’t cross, but directly in my eyeline.

Our plan involved one incredibly genuine, authentic apology. Don’t try to over explain it, just say what you have to say and move on.

After washing down my salmon with a rack of cabs, I mustered the courage to ask her to talk. I apologize just the way we rehearsed, and my sincere apology was met with demands I never look at her or talk to her... ever again.

Annnnd back to my stump in the woods to cry a little more. At this point it’s becoming my only safe place. My husband and new gal pal eventually urged me to come back inside, brush it off, and let that ice queen go. Clearly I played it wrong in a desperate attempt to relate over motherhood, but I didn’t necessarily deserve to be crying in the aspens for the rest of a perfectly decent night.

Recognizing I did all I could to possibly redeem myself, I traded my heels for Converse, vowing to shake it off like T-Swift. Did we own that dance floor? Big time. Did I come to a deeper understanding about humanity by rappelling off a cliff and drinking my own urine? Not even close. Did we find better things to do in the woods? Totally. Turns out moonlight make-outs can cure just about anything.

The last word from Sam: 10/10 embarrassings; awarding you the lifetime achievement award in No Sorry It’s Not A Uterus Bursting With Life, But Just A Belly.

Read more from Everything Is Embarrassing.

More Like This
I’m Getting Dual Citizenship For My Jewish Children, Just In Case.
Searching For Home As A Lifelong Renter
Home Reno Culture Makes Me Feel Like I Live In A "Before" House
Instagram Captions For Your Cup Of Morning Coffee