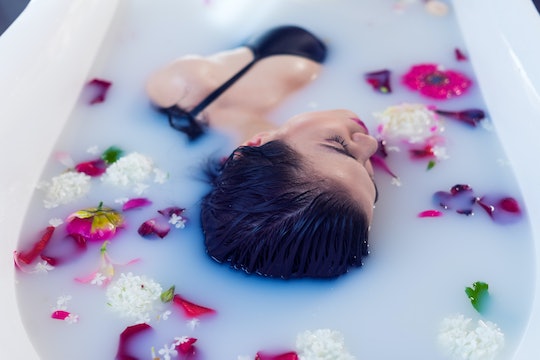 If you? They're one of the hottest trends in maternity shoots (as well as non-maternity), and the effect of the milk makes the photos seem ethereal. If you're pregnant now or already have a little one, you'll want to know how to make a milk bath for photos, because the look is so dreamy.

Making a milk bath is just as simple as it sounds: mix water with milk in the bath. But there are a few other factors that can complicate your photo shoot quite quickly. Photographer Tiffany Burke explained her milk bath recipe to Popular Photography: "Usually I fill the tub to the desired height with water and add in two gallons of whole milk. I sometimes also add some powdered milk to enhance the effect." Couldn't be simpler, right? She also explained that you could omit the powdered milk or use less milk for a more translucent effect.

The other component to a milk bath is usually a set of props, whether those are real flowers, synthetic flowers, or greenery. Burke cautioned that you'll want to do a test run with these props before the actual shoot lest you run the risk that they'll sink rather than float atop the milk. She said, "Real flowers typically float, while synthetic and silk flowers usually sink," but you could use waterproof spray protectant on the synthetic or silk flowers to help them float a little better. She has also used real flowers to prop up heavier synthetic flowers so they float on top.

Your subject's wardrobe is another element to consider. For maternity shoots, most women or their photographers choose sheer fabric. You can be less worried about modesty as the fabric becomes more see-through when wet, as the milk bath should cover your lady parts. Photographer David Zhang, who shoots with his wife Annie, recommended in Baby-Chic that you should choose a more fitted dress, because you want to show off that bump.

Zhang weighed in on the right time in your pregnancy to try to shoot milk bath photos, which is between 32-34 weeks, and reminded us less-experienced, at-home photographers that the amount of light your bathtub gets will dictate the results of the photo shoot. He suggested choosing a tub near a window to capitalize on natural light and cautioned, "yellow bathroom lights are best avoided."

Once you get the milk bath drawn and your props and wardrobe planned, it's time to hop in the tub. As you climb in, "keep your hair and as much of the top part of the dress as dry as possible," said Zhang. Then arrange the props, knowing that any little movement will send the flowers floating away —it's probably best that the photographer does this part. If the subject is a baby, you'll probably want to take the "go with it" route!

Before you do the final shoot, you might want to test what level of opacity you prefer in your milk combination, which sounds like a bit of a waste of milk — except that the benefits milk baths are purported to have are the reason they've remained popular for thousands of years. Cleopatra was rumored to have bathed in milk to keep her complexion beautiful and clear.

Biologist Lorraine Dallmeier wrote in Herb & Hedgerow that milk contains lactic acid, which is an alpha-hydroxy acid that can "penetrate the top layers of the skin to slough off dead skin cells." Exfoliation then causes healthy skin cells to regenerate, causing your skin to rejuvenate more quickly.

All the more reason to take a milk bath, photo shoot or not!