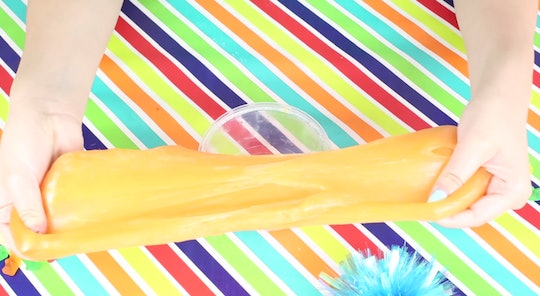 How To Make Edible Slime

DIY slime has kids of all ages in a tizzy, but fun with the original version only lasts so long. Also, with chemicals and other maybe-not-safe-for-toddlers components lurking in common slime ingredients, some parents are looking for alternatives with which they can feel better about letting their kids play. And since kids like to put things in their mouths, knowing how to make edible slime means that you and your little ones can still take part in all the slimy fun. You just have a little more peace of mind knowing that even if your toddler puts the slime in his mouth, everything will be A-OK.

There are a number of ways to turn homemade slime into an edible creation. From marshmallows and Tootsie Rolls to powdered fiber and Kool-Aid packets, there's likely an edible slime recipe out there that'll suit your specific tastes. And some of the easiest varieties of edible slime are only a couple of ingredients. For instance, you can make edible gummy bear slime with only melted gummy bears and vegetable shortening, according to YouTuber Just Ameerah. Two ingredients that both just have to be melted and then mixed together? Not too shabby for a fun, at-home craft slash science lesson.

Candies of all types are common ingredients when it comes to creating edible slimes. If you're not interested in using candy itself, however, the Thought Co. website noted that you can also create edible slime by mixing sweetened condensed milk with cornstarch, food coloring, and a flavored extract. It needs to be cooked on the stove, however, so little kids will need adult supervision to make this version.

Powdered fibers like Metamucil are also common additions to edible slime recipes in order to make the slime gel. According to Steve Spangler Science, the combination of the fiber and water when heated is what creates the gooey texture. While slime made with powdered fiber is edible, you should still probably keep an eye on your kiddos while they're playing with it, as too much fiber can make their little tummies hurt, according to SF Gate. If you're worried about this, powdered fiber may not be the right choice for your edible slime project.

Making edible slime doesn't have to be difficult. You might even already have the ingredients in your pantry. If you're looking for an alternative to the decidedly inedible versions all over the internet and in stores, an edible version made with candy, marshmallows, fiber, or powdered drink mixes just might be what you're looking for.