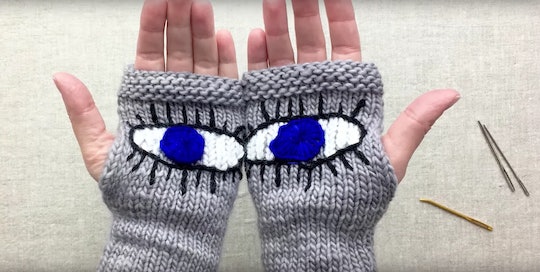 Seasoned crafters and newbie knitters alike are working hard on a specific pattern of gloves for a worthy cause. Learning how to make evil eye gloves for the March for Our Lives movement against gun violence can help you get involved in the action, too. Basically, these gloves are a knitted calling card similar to the iconic Pussy hats of the Women’s March on Washington. Knitting and purling is officially a form of political activism.

There are several online resources to help you make a set of evil eye gloves. For starters, you can download a PDF of the evil eye glove pattern from Krista Suh's website. It contains full specifications of the yarn, needles, and notions you will need, as well as a straightforward set of instructions. There is also a free download of the evil eye glove pattern on Ravelry. It contains more information on the background of the glove idea, as well as ideas for variations. Yes, gloves with brown, blue, or even purple eyes are all welcome at the party. Lastly, for people who learn best with a visual aid, there is the awesome How To Knit Evil Eye Gloves tutorial on YouTube, courtesy of Joy Macdonell. It's simple enough for even the most novice knitters to follow along.

It's no coincidence that the evil eye glove was invented by Krista Suh, who also came up with the idea for the knitted Pussyhats, according to Suh's website, and the gloves were even designed by Pussyhat designer Kat Coyle, as further noted on Suh's website. These two are already experts in the art of clever, politically relevant, and visually striking crafts.

The glove's eye-catching design has a deeper purpose. It is intended to make a strong statement at the March for Our Lives movement on March 24, 2018. On this day, children and families will march in the streets of Washington, D.C., as well as over 800 locations worldwide, to protest the prevalence of gun violence in schools, according to the March for Our Lives website. When the marchers raise their hands in the classic "don't shoot" stance, the gloves will create a sea of eyes, as explained on Krista Suh's website. It's a powerful image about the people who are standing up to gun violence in the United States and keeping a close eye on Congress in the meantime.

If you can't make it to the D.C. march or a local event on that day, then you can still make some gloves in support. If you mail the gloves to the Woman's National Democratic Club, they will be distributed on your behalf. At this time, the marchers are seeking to get at least 438 pairs of gloves donated to represent the 438 people injured or killed in school shootings from 2014 to the present, as explained on Krista Suh's website. The symbolism behind this iconic image is especially moving when you keep that number in mind.

Oh, and what's the deal with the evil eye, anyway? It isn't just a trend. With origins in Mesopotamia over 3,000 years ago (at least), the evil eye is a powerful protective symbol, according to Kashgar. It's the all-seeing eye that protects the wearer from harm. But on another, more personal level, it symbolizes a way of looking at someone with intense scrutiny. (It's like the phrase "giving someone the evil eye" that's still used today.) As you might imagine, the evil eye glove's symbolism was chosen with care and deliberation. The evil eye portrays "an act of aggression — of willful gazing, of not turning away," according to Ravelry. It's a way to let the world know you're against gun violence in a simple, non-violent, and demonstrable way.