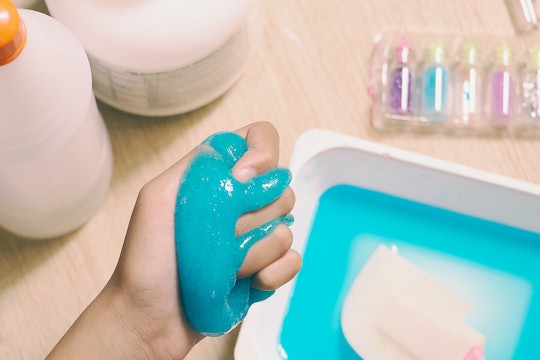 Kid trends may be impossible for anyone above a certain age to understand. Not to mention they change day in and day out. That is, expect for slime. The gooey playtime substance has been around for decades and shows no signs of going out of style. Probably because there are so many variations, including fluffy slime. With this in mind, learning how to make fluffy slime is one project that's sure to delight your little ones.

More Like This
Vaccinated People Can Ditch Masks. Where Does That Leave Kids?
30 Cheap & Easy Summer Activities For Kids
How To Find The Best Insect Repellent For Your Kids & Babies
This Is Why Your Toddler Wants To Feed You All The Time

OK, so the idea of fluffy slime may sound weird. But unlike its drippier counterparts, fluffy slime has a more solid form, sort of like taffy or bubble gum. Plus, it's addictively squishy. And, as with everything else about the slime trend, clever YouTubers have come up with a zillion different ways to personalize your slime. You can make fluffy slime in a swath of pastel shades, or even slime with a pearlescent sheen. Along the way, your kids will pick up some lessons on basic chemistry, as well as some general skills in measurement and mixing.

Additionally, there are a number of super safe recipes available for the masses. If, for instance, you want to leave out the borax or cornstarch, then the slime community has you covered. You and your kids are certain to have fun experimenting with different fluffy slime recipes and playing with the squashy results.

This is a fantastic starter recipe for anyone curious about the fluffy slime phenomenon. School glue, shaving cream, and foamy hand soap are just a few of the ingredients in Charlize Morrison's ultimate fluffy slime recipe. The end result will probably smell amazing, too.

If you're weirded out by the idea of putting borax in your slime, then you're in luck. You can make fluffy slime without borax, courtesy of Slime Masters. Oh, and you can throw in some glitter glue to make the final product extra sparkly.

No glue? No problem. Some shaving cream forms the base of this fluffy slime from Will It Slime.

If you want some extra shine with your slime, then this recipe is for you. The fluffy pearl slime from MonsterKids is a pretty take on the basic fluffy slime recipe. The metallic shimmer is mesmerizing.

When it comes to colors, sometimes more is more. Gillian Bower shows you how to make rainbow fluffy slime. Your kids are sure to enjoy the mix of bright colors and weird but wonderful texture.