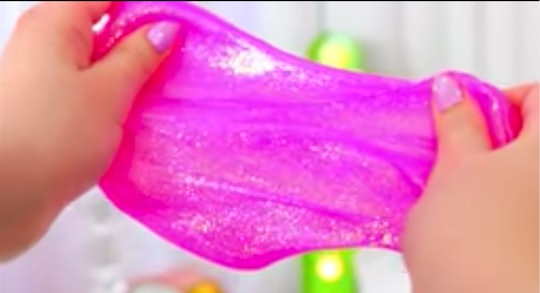 How To Make Glitter Slime

If you thought that the DIY slime trend would be long dead by now, I have some bad news for you — it's still going strong. Your kiddos are likely still preoccupied with playing with homemade slime (or even buying it from their friends), and they very well may have exhausted the entertainment value of typical (also known as "boring") slime by now. The good news is that there are even more variations of slime than there are of glue. If you're looking for a snazzier variation, you need to know how to make glitter slime.

Ultimately, glitter slime recipes often really aren't all that different from the basic DIY slime recipe. According to craft blog The 36th Ave, all you have to do is stir glitter glue, diluted borax, and water together until it gels and you're pretty much there. Typically, glitter slime doesn't even require food coloring or any other dyes, because the glue itself is already a fun color.

But before making your own sparkly slime, make sure you have plenty of glitter glue on hand. You'll likely need at least a cup of glue, so those little glitter glue pens that come in a set containing every color under the sun aren't going to cut it for this project. You can mix in additional glitter if you'd like, though it's probably not necessary, and, as mentioned in a post on Mom Spark, adding extra glitter might slightly alter the color of the slime.

If you can't find (or don't have and don't want to run to the store) glitter glue in the right color or a big enough bottle, A Pumpkin and A Princess write that you can also make the basic homemade slime recipe and mix in glitter to create a glitter slime. If you're going to go this route, you may need to add food coloring or another dye in order to make the slime the right hue.

Making slime at home with your kids can be an opportunity for learning as well as fun. Though they'll probably need adult supervision during the process (due to the Borax or other chemicals that are added), it really doesn't take very much time or energy to make. So grab a bowl, a measuring cup, and a whisk and mix up a batch of glitter slime. The resulting slime will be just as stretchy and fun as the original, with a little more pizzazz.