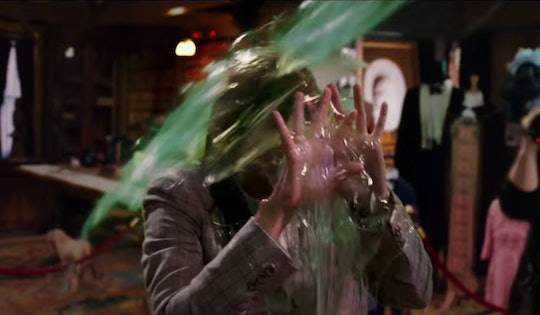 How To Make Kid-Friendly Slime For Your Little Ghostbuster

We're just days away from the premiere of the new Ghostbusters movie, and parents and kids alike can barely contain their excitement. As any parent can confirm, half the fun of having kids is having a legitimate excuse to play (and also watch cartoons and eat chicken nuggets). So what better way to bide time before seeing the movie than playing Ghostbusters? There are a ton of ways to make kid-friendly slime, so after choosing the perfect recipe, it's time to put on some old clothes and take turns sliming each other – outdoors, of course!

About.com has over 20 different recipes for slime, and there's no shortage of instructional YouTube videos (here's one starring a creepy steampunk skeleton scientist, if you're into that sort of thing). The classic recipe parents might recall making when they were kids calls for white glue, water, food coloring, and borax. Simply mix a 4-ounce bottle of glue with half a cup of water and add food coloring (green or pink only, for accuracy's sake). In a separate container, dissolve a teaspoon of borax in a cup of warm water, then combine with the glue mixture and stir well. Classic slime will last about two weeks in a plastic bag.

The trouble with that recipe, though, is the borax. It's 2016, so it's not really a household staple anymore, and there are concerns that it might not be safe for little ones. Don't worry, though; there are plenty of other ways to make an even safer slime. Budding scientists might enjoy mixing equal parts cornstarch and water to make slime, which the University of Wisconsin explains is actually a non-Newtonian fluid, meaning that it can behave as both a liquid and a solid depending on how you interact with it.

But does it look just like the slime in the movies? Not quite. Both of those slime recipes yield opaque slime, and real Ghostbusters slime is translucent. My favorite recipe involves a little more work, but the result looks just like the real thing, and as a bonus for little Ghostbusters who can't keep things out of their mouths, it's actually edible! Just mix food coloring and a teaspoon of fiber powder (like Metamucil or Benefiber) into a cup of water and microwave it until it boils, then stir and boil it again. Depending on your microwave, it should take two to five boils to get the desired consistency. Just be sure to let it cool completely before playing. Now go get messy!