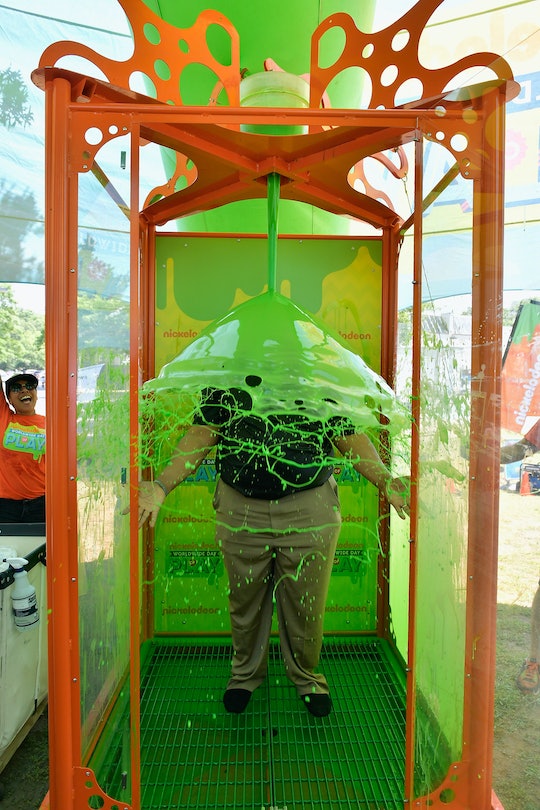 How To Make Nickelodeon Slime & Relive Your Childhood

If you’re a parent, you probably know that DIY slime is all the craze right now. Kids get to use their creativity to create all kinds of goopy slime, in a variety of colors and textures, but if you’re an 80s kid like me, your first obsession with slime began with Nickelodeon’s You Can’t Do That on Television or Double Dare, while watching kids get smothered in the neon green stuff. So if you and your kids want to have fun with the original slime, you should know how to make Nickelodeon slime.

My resident slime expert is my 9-year-old daughter, Anusheh Zafar, who has an extensive portfolio of over a hundred different types of slimes, made with different ingredients and techniques. She says that Nickelodeon slime is one of the easiest and safest slimes to make, because it requires no harsh glues or detergents. “All the ingredients are edible,” says Anusheh, “so you can find things you need right in your kitchen.” Because the slime was meant to be dumped on people’s heads, the ingredients were made to be safe in case it were to get into anyone’s eyes or mouth, explained Mental Floss.

For the longest time, the Nickelodeon slime recipe was a mystery. According to Delish, Marc Summers, host of Nickelodeon's Double Dare, was gracious enough to finally share the elusive recipe to Tech Insider. Summers revealed that the green goo was made of vanilla pudding, oatmeal, applesauce, and green food coloring. Leave it to Nickelodeon to make their slime look cool, and probably taste delicious.

The easiest and quickest way to make the slime, explains Anusheh, is to use pre-made store bought applesauce and vanilla pudding. If you buy a boxed pudding, she says to prepare it according to the box’s directions and do the same with the oatmeal. “Once your oatmeal and pudding are ready, you can mix them together with the applesauce and green food coloring.” Keep adding applesauce to make it thinner if needed, she suggests, and adjust the coloring to the green hue you prefer. Once all your ingredients are mixed, your Nickelodeon slime should be ready for some dumping.

Nickelodeon slime is pretty easy to make, and all the ingredients are safe, even for younger children. The hardest part will be the cleanup afterwards, especially if you decide to have a fun filled splat fest at home.