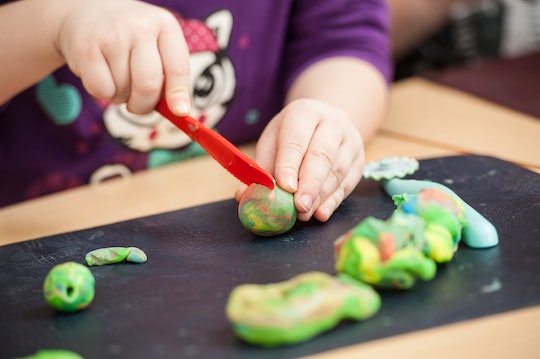 How To Make Safe Playdough

It seems that kids of (mostly) all ages love playdough. It makes sense, really, because it's sculpt-able, squish-able, and colorful AF. You can build with it, cut it up, roll it up, smooth like pie dough, and, for those above the socially acceptable age to play with playdough, use it as a make-shift stress reliever. For some kids, however, this substance could actually be hazardous so it's important to know how to make safe playdough, just in case.

I know — you thought all playdough was safe for kids. But there are several ingredients in either commercial or homemade playdoughs that could pose a problem. According to Hasbro, the company behind Play-Doh, the commerical product contains wheat, making it harmful to kids with gluten allergies. Some recipes for homemade playdoughs also contain wheat flours and salt, which can be dangerous for toddlers, according to Very Well. The site noted that it only takes about a half an ounce of salt to cause harm to a toddler that weighs 28 pounds. Although your little one probably won't eat enough playdough in one sitting for it to be dangerous, the VeryWell article recommended calling poison control and making sure your child drinks a ton of water to counteract the intake of salt.

Making safe playdough is totally doable, you just have to find the right recipe for you. Once you do, you and your kiddos will be rolling, sculpting, and squishing before you know it.