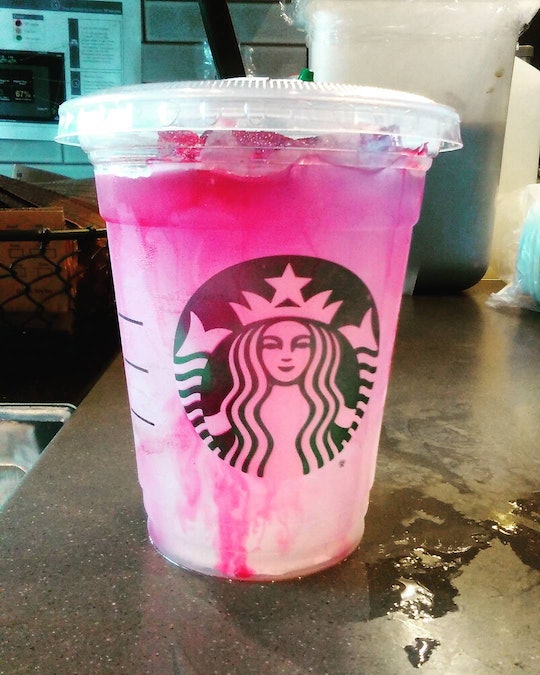 How To Make Unicorn Lemonade

The unicorn food trend doesn't seem to be fading any time soon. Although a number of foods have been given the pastel-hued, magical unicorn treatment over the last year, Starbucks' limited release of a Unicorn Frappuccino last week has made the trend especially difficult to ignore. And even though the Unicorn Frappuccino run has ended, the Unicorn Lemonade may be taking it's place. But why wait in line when you can learn how to make Starbucks' Unicorn Lemonade from the comfort of your own home.

It's worth noting that this beverage is on the secret Starbucks menu, as it wasn't created by the company. In fact, according to Teen Vogue, the Unicorn Lemonade was created by a barista who happened to find another tasty use for the the same powders in the frappuccino. According to the original Reddit post, where the barista shared a (since-deleted) photo as well as the method behind two versions of Unicorn Lemonade, the key is to add extra ice to the drink so that you can create layers. One way of doing it is to mix lemonade and the blue powder in the bottom of the cup before topping it off with Starbucks' passion tea. Another is lemonade with blue powder on the bottom and pink powder on top.

Yet another way to create your own Unicorn Lemonade is to follow the advice laid out in a story on the website for Cosmopolitan. According to the story, ordering a regular lemonade and asking for the pink powder to be sprinkled over the top results in the most photogenic Unicorn Lemonade (maybe those baristas didn't know the extra ice trick). As the lemonade and powder mix, you're left with quite the magenta-hued beauty.

Unsurprisingly, Starbucks baristas have voiced their general displeasure at the idea of another unicorn-themed drink. Luckily for them, because the Unicorn Frappuccino was only available for a few days — and was quite popular — the powders shouldn't last much longer in stores, according to Food Beast. If you're desperate to get your unicorn-colored drink fix, PopSugar developed a recipe based on the Unicorn Frappuccino that uses Kool-Aid packets as the powders. Sprinkle those powders over a glass of lemonade and you're basically all set to partake in the trend without being subject to endless lines or limited time offers.