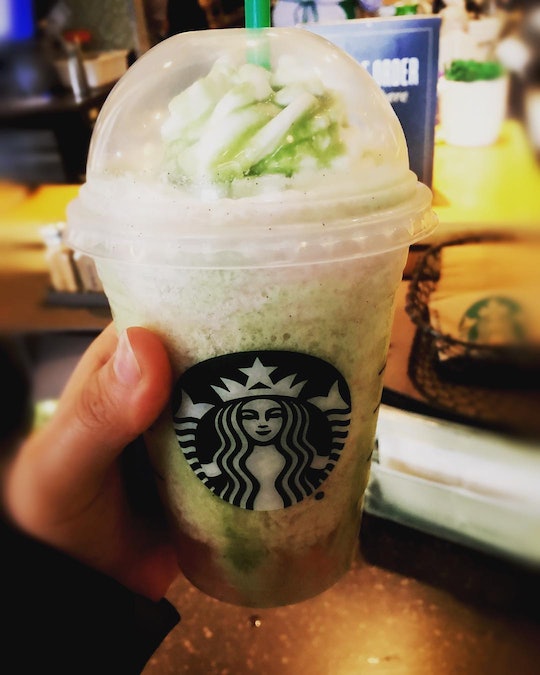 How To Make The Narwhal Frappuccino

It seems the colorful, sweet, and fruity Frappuccino trend is here to stay. After the introduction of the internet-breaking Unicorn Frappuccino, several mythical beverages seemed to follow, including the Dragon and Mermaid Frappuccinos. But now there's another variation, this time named after the real-life "unicorn" who lives under the sea: the narwhal. Wait? What? Yes, I'm serious. If you're wondering how to make the Narwhal Frappuccino so that you too can order it at your local Starbucks and (of course) post a photo of your drink on Instagram, here's what you need to know.

First of all, it's important to keep in mind that this isn't an official new drink that Starbucks has added to the menu. Going in to your local shop and ordering it by name likely won't yield what you want. The Narwhal Frappuccino was created by Jócelyn Freeman, the Bay City, Michigan-based barista and blogger who also created the mermaid version, according to Refinery29. Freeman's narwhal concoction, according to the popular, yet unofficial Starbucks blog, Starbucks Melody, is a blended strawberry lemonade with vanilla bean powder (with which Starbucks makes its Vanilla Bean Frappuccino) and some whipped cream on top. It actually doesn't sound half-bad, though maybe a touch sweet. According to Starbucks Melody, it's taste is somewhat akin to that of a pink Starburst, which everyone knows to be the best of the Starbursts flavors.

That's really all there is to it. So, at the very least, it should be relatively straightforward to order and explain to the barista crafting your drink. While most versions of the Narwhal Frappuccino end up with a pretty, pale pink hue, the one in the photo above sports some green tea syrup as well, likely giving it it's greenish tint. A USA Today reporter ordered one of each of the Unicorn Frappuccino variations and asked the barista to sprinkle some matcha powder over the top of the Narwhal version. If matcha's not your thing, order your Narwhal Frap without it. After all, that's how it was originally created.

If you'd rather make your own and avoid the coffee shop altogether, grab your blender and a tall glass and let's get started. First, you'll need to make the blended strawberry lemonade base. Although you could make your own fresh, homemade strawberry lemonade, a store-bought version will likely do the trick. Next, you need to add a vanilla bean powder, something you won't easily find at the supermarket. Luckily, Kitchen Nostalgia's recipe for vanilla bean powder is pretty easy to make. When combining the two, it's important to blend until the lemonade is frothy and there are no large chunks of ice.

Next, pour the lemonade mixture into your glass and top with store-bought whipped cream. Sprinkle matcha powder over the top, if desired, or give your sea creature creation a drizzle of green tea syrup if you have some on hand. Stick a long straw into your drink and sip up.

According to Grub Street, there are many more novelty Frappuccinos coming soon, so stay tuned — and keep your blender at the ready.