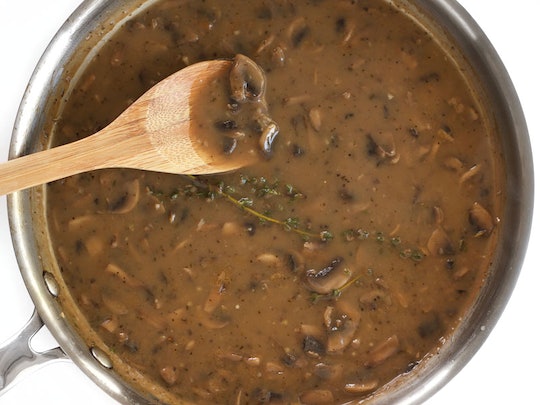 How To Make Vegan Gravy, Because Everyone Deserves This Thanksgiving Staple

With Halloween out of the view and Thanksgiving right around the corner, I have no proper way of hiding my excitement. Though Halloween and the overflow of candy that comes with it makes me love all that life has to offer, there's something about anticipating a really good meal for the Thanksgiving holiday. I honestly love everything about Thanksgiving, but the food is probably the highlight of holiday for me. I'm really not one for vegan eating, but after learning how to make vegan gravy last year, I told myself that it would make its way on the menu for this year's festivities.

When I was first propositioned to taste vegan gravy, I was a little reluctant. As someone who really doesn't eat vegan food, I didn't quite know what to expect. Though it may sound bad, I always pictured vegan food to be limited on taste and nowhere near as packed with seasoning. However, everything changed when I tasted my first batch of vegan gravy.

Sure, gravy doesn't seem like a big deal to have whether it's vegan or not. But as a huge mashed potato lover, there is definitely a difference between the two. To be quite honest, I never even thought to have gravy as a vegan option until I tried it last year and thanks to this mushroom herb gravy recipe from Budget Bytes, I can recreate it for my family to enjoy together.

Although the recipe originally calls for butter, if you switch it out for cooking oil, then you've easily converted into a vegan recipe. The best part about this recipe is that even non-vegan eaters will enjoy it, and if you never wanted to let them know that it was vegan, there's no way that they would be able to tell. For my family, that would definitely be super beneficial because as soon as the word vegan is mentioned, everyone turns up their noses. So, thanks Budget Bytes for making my life that much easier.

So, if this year's menu needs a little sprucing up and you want to add something easy to make yet powerful to bite, throw this delicious gravy recipe on the menu for your guests to enjoy. If you can't wait that long to try it out, make it this week to throw over your rice or mashed potatoes for dinner. I guarantee your clan will be requesting it for this year's holiday hangout.