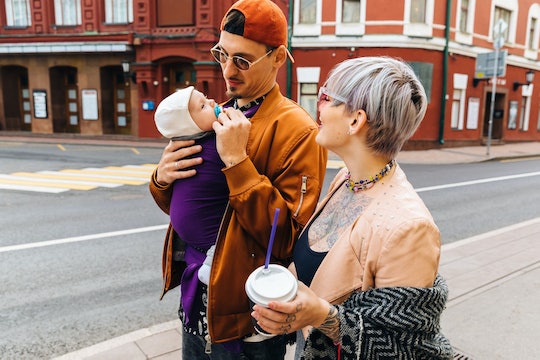 Sheryl Sandberg famously said that the most important career choice you will make is who to marry — a supportive partner who prioritizes your career as much as you do will allow you to succeed, goes the theory. And for many couples, sharing responsibilities close to 50-50 is the ideal. But some responsibilities are more easily divvied up than others, and all the unseen labor that women tend to perform can’t be totted up easily on a ledger.

This work is often called the “mental load,” as we mostly carry it around in our minds. It encompasses juggling schedules, resolving conflicts, remembering birthday gifts, booking the kids’ doctors appointments, and generally keeping watch over the family, should a toilet roll need changing or a burgeoning personality need extra attention. Meredith Masony, host of the podcast “Take It Or Leave It: Advice-ish For Parents,” describes it as being “everybody's everything all the time.” It’s what “nice” women are supposed to do (and all too often no one expects men do it at all). And there’s a pretty good chance that you’re burned out by it — 90% of women felt "solely responsible" for their family's schedule, of those surveyed in a 2019 study by Arizona State University, even though 65% of female respondents worked outside the home.

Sometimes people refer to the mental load and the general care-taking associated with it as “emotional labor,” as in a Harper’s Bazaar essay by Gemma Hartley that went viral a couple years back. However, the sociologist Arlie Hochschild, who coined the phrase in 1983, originally meant it to mean regulating one’s emotions as part of one’s job — think of the perennially friendly flight attendant keeping everyone's mood level at 31,000 feet. Hochschild has said she believes her original meaning of the phrase is being stretched and “over-applied” to encompass a lot of unpaid work done in the home by women. Whether you call it care-taking, emotional labor, or the mental load, there are ways to unload some of it — which you will need to do if you want to push forward in your work.

But it involves having an open, honest conversation with your partner.

Here are some tips on how to get started:

You need to talk about it.

The mental load can snowball out of control in part because we don’t talk about how burnt out we feel while it’s happening. But like any sore area in a relationship, avoidance doesn’t make the situation better.

Dr. Sheryl Ziegler, a psychotherapist in Denver, Colo., and the author of Mommy Burnout: How to Reclaim Your Life and Raise Healthier Children in the Process, suggests talking when both you and your partner are calm and relaxed. (In other words, right after you just blew up at him over forgetting to book the babysitter for Saturday night is not a good time.)

Ziegler says your partner may not even be aware that you feel spread thin, so you should go into the conversation expecting to explain yourself. A potential script, she suggests, could be “You might not even know that I have been upset about this, but I carry a lot of resentment.”

[Some women] expect that these nonverbal gestures will result in conversation and they often don't.

She also warns against trying to force a discussion through “passive-aggressive” behaviors that show your resentment, like folding all the laundry except for your spouse’s. It’s possible that your partner won’t even notice what you did or not connect it to being annoyed.

“[Some women] expect that these nonverbal gestures will result in conversation and they often don't,” she says. Put your big-girl pants on and verbalize your feelings directly.

Clarify what it is that you want out of talking about this.

Are you talking about the unseen labor that you do because you need to vent? Or did you broach the topic because you want your partner’s behavior to change?

“You've got to be clear about what it is that you want out of presenting the problem,” Ziegler says. "'I just want you to listen’ or ‘I'm going to tell you a problem and I really am looking to you for some solutions or answers.'"

That was certainly the experience for Masony, the podcaster. “When I was trying to do it solo, I wasn't able to keep it all together,” she recalls. She said her husband only seemed to understand the mental load she had been taking on when he stepped up to take on more of it.

“[He said”] ‘I had no idea how much you did until I started doing the things that you are doing every day,’” Masony says. “And he's like, ‘I can't do it all,’ and I said to him, ‘I know, nobody can do it all.’ Like, why do you think I was just exhausted all the time and just mentally spent by the end of the day?”

At the same time, numerous studies have shown that competing expectations and work-life conflict not only put a cloud over your home, but negatively impact your work performance, per an analysis in Frontiers Of Psychology. And you don't have time for that.

Be intentional in how you phrase the conversation.

It’s important for women to be able to ask for help. But at the same time, if you use a phrase like “help me out” — as in, “I need you to help me out when the kids are fighting” — you are still centering yourself as the one who is responsible for all this stuff. Your partner isn’t your helper, though; your partner should be carrying their own weight.

One thing that can be useful in this discussion is explaining your partner the potential benefits: being more involved in their kids’ lives, the two of you having a happier relationship once you prioritize your well-being, and so on.

Whether it feels necessary to talk about or not, studies show that the workload gap between mothers and fathers is profound: mothers of children younger than 6 years old "spend more time on paid and unpaid labor than fathers within every demographic group," excluding fathers who work multiple jobs, found a report by the Center for American Progress analyzing the 2017 American Time Use Survey.

Set boundaries and stick to them.

When women establish boundaries for ourselves, we can be called rude, unkind, even bitchy. It’s really important not to let other people’s expectations of what women are supposed to do — be self-sacrificing! Do everything for everyone no matter what! — hurt us. Acknowledge that this is someone else’s problem to deal with. A new boundary signifies change and change makes some people uncomfortable, or even give you pushback.

“Just know that just by setting a boundary, people [can get] all suspicious, a little shifty, uncomfortable,” says Ziegler.

If you use a phrase like 'help me out' — as in, 'I need you to help me out when the kids are fighting' — you are still centering yourself as the one who is responsible for all this stuff.

But you need to trust that your partner is capable of handling responsibilities — scheduling appointments, buying birthday presents, whatever it may be — on their own while you prioritize your well-being. Eventually, it will become the new normal.

Find ways to divvy up some of the labor.

Many women can feel like they are the social arbiters in their family — and they grow to resent being the calendar mistress. Especially when it comes to heterosexual relationships, says Ziegler, “a lot of men are not always included on the social aspects of things. When there's a playdate or a birthday party, a lot of times just Mom is on there and not Dad.”

This, of course, puts a lot of pressure on Mom to manage all aspects of everyone’s social lives.

Make sure that your kids’ schools and extracurriculars, as well as babysitters and pet sitters, have both your contact emails and phone numbers. Get in the habit of CCing your partner on emails, or adding their number on texts, involving social plans. When your partner is looped in, there will be less of an expectation that planning (pick-ups, drop-offs, cancellations, rescheduling, etc.) fall solely on you. Using shared calendars, or putting upcoming occasions like family birthdays on a white board, can also help.

Unloading some of the mental load can take time, but it is possible. Masony calls it a “game changer” when her husband began taking on more of these responsibilities, which she says had been “crippling” her.

More Like This
Tips To Co-Parent With A Stepparent Successfully
How Do I Rediscover My Sexuality When I’m Completely Touched Out?
It's A Beautiful Day In Jenny Slate’s Neighborhood
How To Ask Your Partner For Support When You Need It