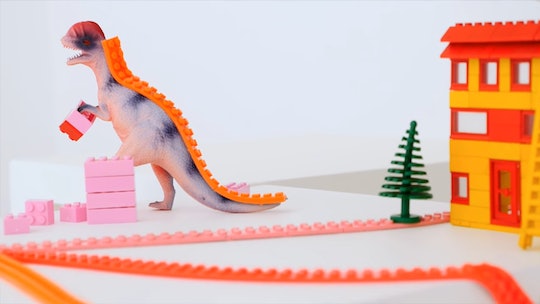 Nimuno LEGO tape is quite possibly the coolest and most innovative toy not on the market right now. It’s an adhesive tape that allows kids to turn any surface into a LEGO-like play station, so little ones can make curvy rivers and mountains that swing around corners or they can make the twistiest rollercoaster that only a child’s imagination could dream of. It’s an incredible invention with endless possibilities. But it’s not exactly available for immediate purchase right now and the flexible, cuttable tape won’t be sold in stores right away either. Don’t worry though, because there is a way to get your hands on a few rolls and the best way to do so is through the trusty internet. So if you’re wondering how to order Nimuno LEGO tape online, you’re in luck because it’s super simple to do and fortunately, this latest trend won’t cost parents a fortune.

Here’s what to do: Because it’s still in its prototype and production stage, the only way to buy the building block tape is to pre-order it through IndieGoGo, an international crowdfunding website. Nimuno is the New York design studio that's backed the project, which was started by a couple of industrial designers from South Africa.

Anine Kirsten and Max Basler, the tape’s inventors, have gotten an outpouring of support and have raised more than $1.3 million to fund the project, well above their original goal of $8,000; They plan to use the money towards final prototyping and production, according to Curbed. And LEGO enthusiasts seem to be totally on board with the idea considering that nearly 35,000 people have financially helped make this idea a reality.

At the moment, parents still have a few very affordable options to choose from: two rolls of 6.5 foot tape for $13 and four rolls for $26. Things start to get a little pricier with 10 multicolored rolls for $58, 12 for $72, and there’s even an option to buy 1,050 rolls of the tape for $3,000 (seems crazy, but six people have already bought this option). So depending on your kid’s current LEGO supply and the ideas they’ve already sketched out for their future creations, that will help determine how many rolls you’ll want to snag.

Kids will have to sit tight for a few months though, since the expected delivery date for the available options is set for this August, according to IndieGoGo. It might be a long time until arrive at your doorstep, but considering how much play time little ones will be able to get out of those rolls of tape, it seems like it will certainly be worth the wait.