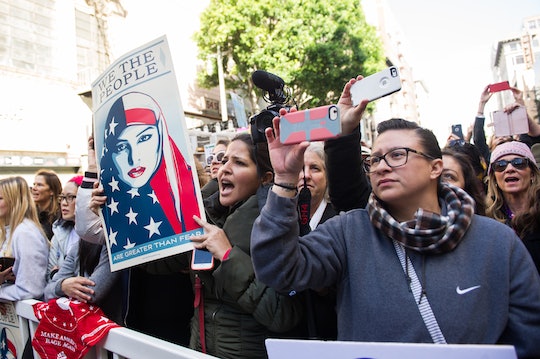 Here's How To Join The Women's March Sit-In

It has been six months since President Donald Trump was elected to the White House, and for many Americans, it hasn't exactly been easy. But they haven't just been sitting idly by; a day after the inauguration, the Women's March on Washington led a hugely successful protest that drew the support of millions around the world, and since then, the group has been encouraging supporters to continue to speak out against the Trump administration. In the latest campaign, Women's March organizers planned a day of sit-ins at various congressional offices throughout the country meant to take place Monday. Wondering how to participate in the Women's March sit-in? Supporters have said that this form of civil disobedience can help make a major impact.

According to Teen Vogue, the congressional sit-ins have been organized as the last event in the Women's March's "10 Actions/100 Days" campaign, which was designed to keep the momentum from the original march going long after the inauguration ended. And there's no question that Americans have been making their voices heard: since the March on Washington, people all over the country have banded together for other important protests, like the #NoBanNoWall movement at airports nationwide following Trump's January executive order on immigration; the A Day Without a Woman general strike in March; the Tax March, the March for Science, and the People's Climate March in April; and the #BeyondTheMoment movement on May 1, according to the Women's March website.

In addition to joining the list of planned sit-ins, Women's March organizers have asked supporters to sign the Pledge of Liberation, a "cross-movement collaboration" designed to help supporters "recommit [themselves] to resistance work — and to each other." The idea behind the pledge? Instead of pledging allegiance to the Trump administration (one which Women's March organizers claim "actively oppresses and harms" Americans), the public can instead pledge its allegiance "to the collective liberation of all ... communities," allowing Americans to "collectively stand for dignity, justice and freedom in the face of attacks on our health care, our identities and our lives."

The Pledge of Liberation was created as a cooperative effort by a number of groups, including Women’s March, the American Civil Liberties Union, United We Dream, Hollaback!, the National Lawyers Guild, UltraViolet, and The Gathering for Justice, along with other national and local partners. But while signing the pledge is definitely important, participating in the sit-ins allow those who have taken the pledge to go one step further and actually take action.

While the groups involved in the pledge advocate for a variety of very important issues, it seems like it might be a particularly appropriate time to be staging a sit-in at your representative's office, given that the GOP's controversial health care bill narrowly passed in the House last week. Now, Republicans must attempt to get the bill to pass through the Senate, but since a number of senators have already denounced it, according to TIME, it doesn't exactly seem like it'll be a slam dunk. For those representatives who are unsure, public pressure could certainly have an impact on their opinions, so Women's March organizers are encouraging Americans worried about the American Health Care Act to let legislators hear their concerns about the House's decision to pass the bill, in hopes that it will effect the eventual Senate vote.

Sit-ins have already been planned in a number of cities throughout the country, and you can search the organized sit-ins on ActionNetwork.org to find one near you. Don't live near an organized event? You can search for the name and address of your local representative, and either picket outside of your congressperson's office, or hold a sit-in inside where you can attempt to read him or her a copy of the pledge. The Pledge of Liberation calls upon Congress to end sexual, state & police violence; to uphold protection for reproductive rights; to ensure the rights of those with disabilities, immigrants, workers, and LGBTQ people; and to fight for the environment, civil rights and racial justice. (Not sure how to hold a sit-in? The Women's March website offers a downloadable Day of Action Toolkit with more information.)

If you didn't vote for Trump, then it likely hasn't been easy to watch as his administration has spent the past few months advancing controversial policies that might undo the much-needed protection that many vulnerable Americans require. But you don't have to remain silent. By peacefully demonstrating on May 8, you can let your representatives know that their constituents are paying attention, and that they aren't afraid to be politically engaged.