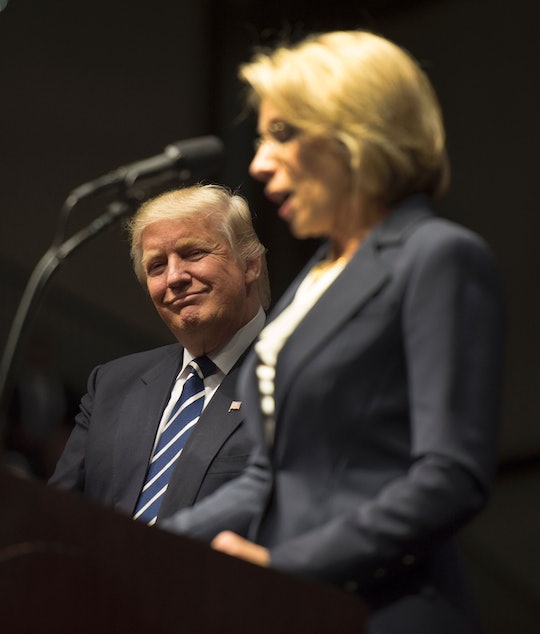 How To Petition Against Betsy DeVos

With President-elect Trump's own conflicts with the Office of Government Ethics and its Director Walter Shaub, growing attention and scrutiny are being paid to the disclosures of his Cabinet appointees. Betsy DeVos, the billionaire heiress of the Amway fortune has been nominated to lead the Department of Education. And while her Congressional hearings have been scheduled, she has not completed the necessary steps to fully disclose her financial holdings. Here's how to petition Betsy DeVos for Education Secretary, because her ethics paperwork is still missing.

Romper reached out to DeVos through her family foundation for comment about her ethics filings, but has not yet received a response.

"We seem to have lost contact with the Trump-Pence transition since the election," OGE Director Shaub wrote in an email to the Trump team, according to CNN:

Announcing Cabinet picks without taking OGE up on the offer to take an early look at financial disclosure picks poses the risk of embarrassment for the President-elect ... in the event that the individual walks away from the nomination after learning what he or she will have to do with his or her financial interests.

DeVos' hearing already had to be postponed because she hadn't completed the paperwork, and as of Monday, according to CNN, the OGE has none available online for her nomination.

DeVos, in addition to concerns from the OGE about potential conflicts of interest, is a controversial choice to run the Department of Education, particularly considering she is an advocate for school choice and voucher programs as an alternative to the public education system she would be in charge of running as Secretary of Education, according to The Atlantic.

Teacher's union leader Randi Weingarten reacted to the DeVos nomination by calling her the, "most ideological, anti-education nominee" in the agency's history, according to this tweet from Washington Post education reporter Emma Brown.

So if you're an American interested in voicing your opposition to DeVos' nomination, there are several ways to do it.

First, there is a petition on Change.org titled, "Say NO to the appointment of charter school lobbyist Betsy DeVos for Education Secretary." That petition has just over 5,000 signatures.

Another petition at MoveOn.org titled, "Emergency PETITION: Defend Public Education - Vote NO on Betsy DeVos for Education Secretary" points out that her Congressional hearing postponement, "comes after Democrats raised concerns about the fact that the Office of Government Ethics, which has said it is overwhelmed by vetting Trump’s nominees, has not yet completed its review of DeVos’s financial holdings and potential conflicts of interest."

The petition is trying to gather support on social media with the hashtag #STOPDEVOS.

In addition to petitions, the Network for Public education offers a tool to send a letter to your Senator to urge them to vote against DeVos' confirmation, which has already generated nearly 97,000 emails.

If you are interested in reaching out to your own representatives about DeVos, or any other appointment or action by the incoming Trump administration, here is a tool from Open States that will provide you with your legislators' contact information by zip code.

The DeVos confirmation hearings are scheduled to begin on Tuesday, Jan. 17, at 5 p.m. and will be live streamed on C-SPAN, according to the Detroit Free Press. If you want to let your representatives know you want to block the DeVos appointment, time is running out.