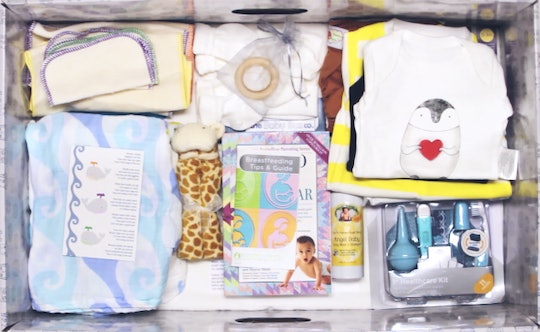 How To Petition For Baby Boxes In Your State

You may have heard about baby boxes in the past. They've been given to mothers and expectant mothers in Finland for decades, and are basically a "starter kit" for parents and their newborns. The boxes usually contain clothes, blankets, and other items to help care for a new baby, and the actual box the kit comes in includes a mattress that can be used as a bed and crib. Though they've been popular overseas for a long time, they haven't taken off as a national trend here. However, New Jersey recently became the first state nationwide to test out a universal baby box program for residents, and now, clinics in other states are taking notice. As new programs pop up, you might be curious about how to petition for baby boxes in your state.

In New Jersey, any expectant parent or parents of infants younger than 3 months old who are residents can register to receive a free box and other essentials. The program is new, but may be an inspiration for other states to follow suit. In Texas, after receiving a presentation on the maternal mortality and morbidity rate in the state, an organization called Women's and Men's Health Services of the Coastal Bend decided to tackle the issue in their local community with their own initiative, The Box Project.

The Box Project actually goes one step further than the program in New Jersey, in that the program supports parents for every step of pregnancy and early parenthood — from pre-pregnancy to the early months of caring for a new child, according to caller.com:

The clinic can give a total of five boxes for each part of the child-bearing process, including ones for women trying to get pregnant like Espinoza, early pregnancy, birth and post-partum. There is also a box made for men to help their partner through early motherhood...

...In the woman's eighth month of pregnancy, she is given a box big enough to let the baby sleep in. It has a removable/washable mattress. clothes, child care products and items like a thermometer, blanket and baby sleeper, to help in the first few months.

It's notable that the initiative also includes a box for the partners of a pregnant person. The Box Project appears to focus on parental needs as much as the necessities required to care for a newborn.

So with the idea gaining in popularity, how can someone go about petitioning to get baby boxes in their own state or community?

In the case of The Box Project, the program was started by a health organization. So it might not hurt to research ones in your area, to get guidance and offer ideas on how to launch something similar in your community, or even the state as a whole.

In New Jersey, a woman named Judy Postmus is vice-chair of the New Jersey Child Fatality and Near Fatality Review Board, and the The Centers for Disease Control and Prevention funded the program, likely with evidence and guidance from the review board. Postmus may have been well-connected enough to help make things happen after she read an article last year about the program in Finland, but that doesn't mean anyone else can't petition a similar board or agency to try to advocate for something similar in another state.

The key seems to be having a goal of getting necessary items to more parents, and backing up your advocacy with research and knowledge. A few facts can go a long way. For example, many of the programs already in place cite the fact that Finland’s infant mortality rate fell from 65 deaths for each 1,000 children born in 1938 to 1.3 deaths per 1,000 births in 2013. Here in the U.S., the infant mortality rate was 5.96 infant deaths per 1,000 live births in 2013. And those rates vary by state. Based in part on figures like that, slowly but surely, communities in the United States are giving baby boxes a shot.

In Missouri's Bootheel region, starting this month, boxes have been sent home with new moms at three hospitals via a federally funded Healthy Start home visiting program for mothers and newborns. That program is funded through Home State Health Care and the Missouri Foundation for Health. The groups now have built an inventory of almost 3,000 boxes.

Children's Health Alliance of Wisconsin recently started a pilot program for similar boxes, which they call 'newborn nests.' As of Wednesday, they've handed out around 20, on a case by case basis.

And on the Baby Box Co.'s website, information about a baby box program in San Francisco for residents who had or will have a baby between October 1, 2016 - November 1, 2017 is listed. In that case, the company partnered with local organizations and distribution centers. A tweet on November 3rd from the San Francisco News twitter stated, "Company Brings Safe 'Baby Box' To U.S."

It looks like the best way to petition with baby boxes in your state is to reach out to organizations and agencies similar to the ones instrumental in getting programs off the ground in other states. They might already be looking into launching a program, or might appreciate local parents bringing the idea to their attention.