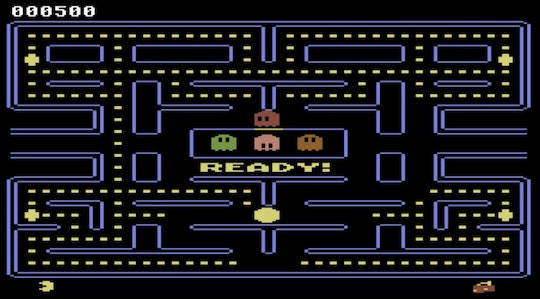 How To Play The Pac-Man Game On Google Maps

It's not quite the right day yet, but Google has already launched an April Fool's Day version of Google Maps that lets users play the classic Ms. Pac-Man arcade game in real life, on real streets. In order to play the Pac-Man game on Google Maps right now, the first thing someone is gonna need is a smartphone or computer. Once a user grabs their iPhone or Android or whatever phone of choice, or a desktop or laptop instead, they can get started.

According to The Telegraph, anyone with a smartphone can access the game by opening up the Google Maps app, then clicking on the pink circle in the bottom right corner of the screen. Then, the publication reported, the app will transport the user "to a random location, turning the map blue and throwing you into a version of the game." Cool, right?

USA Today reported that the "pink circle" is actually an image of Ms. Pac-Man that reads "Insert Coin," as if the nostalgia factor isn't already ramped up enough by just being able to play the classic game on a more modern piece of technology.

Similar to the original Pac-Man and Ms. Pac-Man games, in the Google Maps version, the player has to guide their yellow character around the map, all while eating up dots and avoiding the arch-nemesis of Pac-Man — the ghosts.

Forbes reported that, while users can "go" anywhere in the world in the game to play, and not just stay in their own neighborhoods, "cities are generally a better bet." Sort of like how people in cities generally had better luck playing the popular Pokemon GO game when it was released, and those of us in more rural areas had more trouble with it (nope, not bitter here, not at all, why do you ask?).

According to The Independent, "some users are reporting slight differences between the two versions," playing on either Android or iOS. But what else is new? It wouldn't be the first time features between the two operating systems are slightly different. As long as anyone with a smartphone can play, it sounds like the differences are minor and not a nuisance to players so far.

And there's good news for those without a smartphone: The Independent also reported that people can play the game on the desktop version of Google Maps as well. April Fools fun for everyone!

In a blog post, the Product Manager of Ms. Pac-Maps posted:

Starting now until April 4, you can chomp fruit, avoid ghosts, and collect PAC-Dots along city streets in Google Maps worldwide—all as Ms. PAC-Maps. Just tap on the Ms. PAC-Maps icon on iOS and Android, or click the Ms. PAC-Maps button at the bottom left on desktop, to enter the maze and start chompin’. Sign in to save your top score on the leaderboard and share with friends.

So the fun doesn't end once April Fools Day is over, and users can share their score with friends for bragging rights. Because if someone gets a really good score, how else is everyone else supposed to know it's real, and not another April Fools joke?

The Telegraph reported that this isn't the first time Google Maps has utilized Pac-Man for an April Fool's Day feature. On the web version, the idea was also done in 2015, according to the publication.

And Forbes suggested that the new feature doesn't have to end once the prank-filled holiday is over. "Why not turn it into a genuine game?," said contributor Dave Thier. "...Pokémon GO started out as an April Fools' concept before Niantic fleshed it out into the full-fledged game we have today. Why not do the same thing for Pac-Man?"

But just in case it doesn't stick around for long, interested players can open the Google Maps app on their smartphones or their computers and play "Ms. Pac-Maps" right now. Those avoiding being pranked can just spend their weekend rocketing up that high score instead.