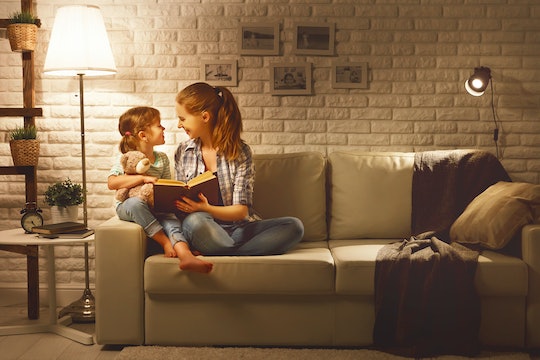 How To Prepare A Toddler When You're Adopting A Baby, According To Real Moms

Adoption has touched my family in so many ways. I have family who are adopted, friends who're adopting, and I plan to adopt at some point in the future. However, just like everything else, there are challenges, especially if you have older children — explaining adoption can be difficult. If you're wondering how to prepare a toddler when you're adopting a baby, you're definitely not alone.

Adoption is a beautiful way to grow your family, and not as uncommon as you think. According to the Bureau of Child Welfare, one in 25 families in the United States has an adopted child, so there are plenty of websites and mommy boards to tell you how tricky it is to prepare a toddler for an adopted sibling. But honestly? That's not the experience I've witnessed. Yes, it's an abstract idea, but when your child is a toddler, childbirth is abstract, too. "Wait, you're doing what and my sister is coming out of where? How?" Adding a new baby to the family — no matter how you do it — is going to be a challenge for the toddler at home, but their minds are resilient and creative.

There are a few things that you can do to ease the transition, and I asked some real moms how to prepare a toddler when you're adopting a baby. Some of these moms adopted newborns domestically, and some adopted slightly older children internationally. Obviously, these are two very different experiences, but, they have some really great advice.

Cathy Ham, 31, tells Romper that when she found out she and her husband were chosen to adopt twin boys by the birth mother, they were really excited — and really scared. "You want to shout it from the rooftops that you're having twins, but at the same time, you fear that something will change with the adoption. At best, we were quietly stoked. As far as preparing Abe (who was 3 at the time), we told him that he would be getting two new babies, and they would be his brothers. Abe, who is also adopted, had learned from day one that he 'grew in our hearts,' so he wasn't surprised at how we were having more children, but more as to why. We prepared Abe by going through his baby book with him, and getting the nursery ready. We also told his Sunday School teacher, who casually would bring it up to him, and get him warmed to the idea on the sly."

Mira Swartzentruber, 34, tells Romper that when she got the call from Taiwan that there was a baby for her, she immediately began talking to her then 2-year-old son, Seth. She said they involved him in everything, and showed him pictures of the baby sent by the agency. They eventually also had to prepare him for the fact that his little sister was coming to them fully mobile and 1 year old. They knew that baby Dallas would have a difficult time during the transition, so they tried to prepare Seth for that by having lots of playdates with all sorts of children, getting him used to the idea of sharing his toys and his home with a new little sister.

Some families start the discussion even before they know a baby will join them. Ashley Adams, 29, tells Romper that she and her wife, Jana Morris, 35, didn't wait to tell their nearly 3-year-old son Pip that they were adopting another baby. As soon as they were in serious discussion with the agency, and began the process to add to their family, they told him. They explained the whole process — as best they could to a 3-year-old — and listened to his questions and concerns. They had Pip help pick out some toys for his new sister as soon as they found out she was coming, went through baby name blogs with him, and read him stories about adoption. "Overall," Jana says, "he was super chill about the whole thing until we brought Jewel home. Then, he was so excited and loving, and a great big brother. He's still a great big brother, but they do occasionally throw sh*t at each other." (Side note: if I had a penny for all the stuff I hurled at my siblings, I could pay off my student loans.)

According to Adoption.com, the most important thing you can do to prepare your child for an adopted sibling is to let them know you're not replacing them. You're growing your family, and your child is a huge part of that equation. Be an open book about it. There will definitely be some struggle, but as the mom of a few biological children, I will tell you that is universal. It is a bit harder when you're adopting an older baby, and they have a difficult transition themselves, but that's just a different sort of difficult than the average, everyday struggles as a parent. Fortunately, there are experts in family psychology and adoption who can help you navigate this terrain.

Adoption is amazing, and we're lucky that the United States has so many resources to grow your family this way. There will be challenges, but there will also be so much joy and love, and while most people think it's the child that is given the gift, you'll know it's you who has been blessed.