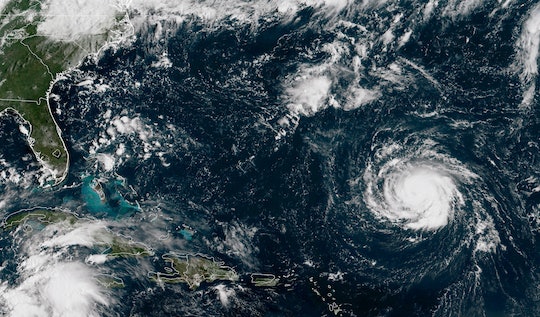 Here's How To Prepare For Hurricane Florence

The National Weather Service recently upgraded Hurricane Florence to a Category 4 storm due to its high winds. A storm of that magnitude has the potential to do seriously devastating damage. In the face of such destruction, you may be wondering how to prepare for Hurricane Florence. Proactive planning is key to making it through the storm; here are a few tips.

As of now, thousands have been ordered to evacuate along North Carolina's east coast, including all visitors and residents of the Outer Banks and Hatteras Island beginning at noon on Monday, according to USA Today. The National Weather Service issued a statement on Monday that read, "During extreme events, even those areas which normally do not flood are at risk." This means that even more locations are at risk.

Florence is expected to continue to grow in strength, moving between Bermuda and the Bahamas on Tuesday and Wednesday before hitting the eastern United States. Thereafter, USA Today reported. "Florence is forecast to become a major hurricane this morning, and is expected to remain an extremely dangerous major hurricane through Thursday," the hurricane center warned. In light of the seriousness of the storm and the expected impact, preparation is necessary.

The National Hurricane Center (NHC) points to two key factors for weather safety: preparing in advance and putting your plan into action when alerted by emergency officials to do so. NHC director Rick Knabb and AccuWeather Hurricane Expert Dan Kottlowski listed a few steps that you can take to minimize your risk. The first is evacuation planning, Knabb said. Determine if you live in an evacuation area, and if you do, know your evacuation route. Kottlowski added that testing your route ahead of time can be helpful, too. “Some people will actually test the evacuation route in good weather,” he said. “Waiting until the day of the hurricane isn’t a smart idea since everyone will be in a heightened state of anxiety.”

Like the NHC, the Centers for Disease Control also recommended that families plan ahead for powerful storms. First, be sure that your home and car are fully stocked with emergency supplies such as bottled water, extra batteries, and a first aid kit. Additionally, a list of emergency phone numbers should be kept both physically on paper and in cell phones. Other must haves for the house include fire extinguishers and battery-powered or hand crank radio and a NOAA Weather Radio with tone alert. Finally, know the location of the nearest hurricane shelter in your area, as well as the sound of warning sirens in your area and what they mean.

Don't delay in getting your supplies. Nick Petro, National Weather Service warning coordination meteorologist in Raleigh, North Carolina, warned against waiting in a briefing on Sunday:

If this, which is looking sort of like a worst-case scenario, comes to pass, there’s going to be a lot of folks rushing out at the last minute to get supplies. You have all day today, the weather’s generally OK, tomorrow, Monday, those are the days people need to be out there preparing because come Tuesday and Wednesday, if this holds, there’s going to be a lot of concerned folks out there. The sooner preparations are completed, the better.

Other important steps, according to Accuweather, include making copies of important documents, such as proof of ownership documents. “If a hurricane levels your house, you have to prove that it is your house,” Kottlowski said. Check that your home insurance covers potential storm damage, and have your home evaluated for safety and stability. The threat of an impending storm can be stressful and frightening, but planning ahead can help keep you and your family safe and secure.