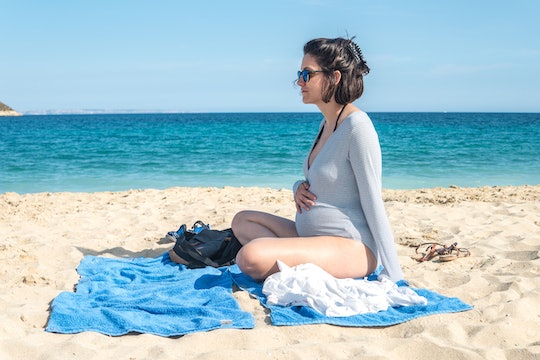 How To Prevent Gestational Diabetes

Complications during pregnancy can be scary for anyone. The thought of something, no matter what it is, negatively impacting the health of you or your baby can be stressful. Being diagnosed with gestational diabetes is no exception. It's true that certain risk factors you are born with will make you predisposed to acquiring gestational diabetes, but women of high or low risk may wonder how to prevent gestational diabetes during their pregnancy.

According to the Mayo Clinic, gestational diabetes is when a woman develops diabetes or high blood sugar levels during pregnancy. There are couple of things you can do to prevent gestational diabetes just as you would Type 2 diabetes, like diet and exercise. But sometimes a person's family history and genetics automatically puts them at a higher risk. According to the Mayo Clinic website a woman who is black, Hispanic, American Indian or Asian has a higher risk for unknown reasons, as well as any woman over age 25, with a family or personal history of diabetes and a body mass index over 30.

Everyday Health noted that gestational diabetes can put you and your baby at risk for serious health issues including preeclampsia or high blood pressure, which can cause intense swelling, prevent your baby from getting enough blood and nutrients. In some cases it can cause seizures and even death. The risk of death from preeclampsia in the United States is very low, but it's still a very real threat. The only way to treat it is to deliver the baby which is why most women with the condition are urged to deliver early. Gestational diabetes can also cause a woman to deliver a very large baby and increase her chances of having a C-section.

So can you prevent this? To some degree, yes. For starters, it's important to be aware of what you're eating during pregnancy. This can present a challenge, because many pregnant women may crave foods that aren't the most nutritious (hello pickles and ice cream.). But by consuming these treats in moderation, you can help stave off the possible gestation diabetes diagnosis. Additionally, Web MD recommended including fiber in your meals from sources like vegetables, fruits, and whole-brain breads, crackers, and cereals.

Another way to stave of gestational diabetes is to get a little exercise over the course of the next nine months. Check in with your doctor to see what kind of exercise is allowed during your pregnancy. Yoga and light walks are always a good choice.

Finally, if you end up being diagnosed, it's important to remember that you're not alone. Approximately nine in 100 women are diagnosed with gestational diabetes according to Web MD, meaning there are plenty of support groups out there to get you through. Though there are some predisposition factors that put certain groups of women more at risk than others, doctors say having a good diet and exercising regularly can prevent gestational diabetes or impede further complications from developing if already diagnosed.