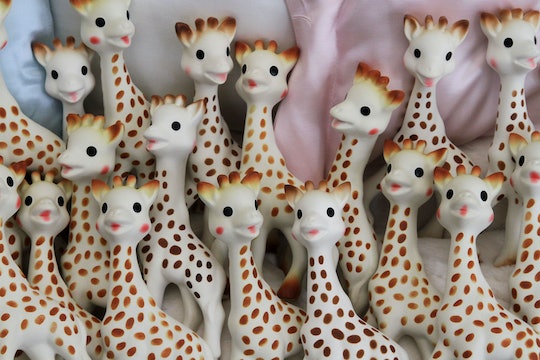 Preventing Mold In Sophie The Giraffe Is Simple

Now that the hustle and bustle of the holiday season has officially expired, and you're ready to settle into some much-deserved down time, the internet is here to stress you out, yet again. A Good Housekeeping article posted this week revealed reports from parents everywhere that their children's Sophie the Giraffe teething toys were infested with mold. After the article went viral, parents everywhere panicked, some even cutting open their own Sophie toys to see if the rumors of the mold were true. Unfortunately, it seems those concerns may not be unfounded, leading many parents to wonder how they can prevent mold in their kid's Sophie the Giraffe teething product and avoid tossing their little one's beloved toy.

The company behind Sophie the Giraffe issued a statement recently emphasizing the importance of cleaning the toy regularly. Sophie retails at around $30, and has been branded as a top-rate teething toy for toddlers, so keeping it sanitary and washing it regularly, in accordance with the proper instructions, is key. (Some of the parents whose toys were affected disputed that fact, claiming that they had cleaned their own giraffe toy properly but that it had still collected mold, despite the company's claims.)

So while Sophie's future may seem bleak, she can still be preemptively saved. Also of comfort: Technically, unless your child is allergic to mold, or has other major health concerns such as leukemia, the type of mold that's been found in Sophie is relatively harmless. (Not that it makes it look any less gross.)

According to the statement that Sophie manufacturer Calisson released to Good Housekeeping in response to the mold reports, Sophie should be cleaned without submerging her in water:

First of all, it's important to know that Sophie la Girafe [Sophie the Giraffe] is composed of 100% natural rubber, so the cleaning instructions have to be carefully respected. As indicated on the packaging and in an explanatory leaflet inside the packaging, we recommend to clean the surface of Sophie la Girafe with a damp cloth. It should not be immersed in the water nor rinsed off, to prevent water from getting inside, as she may become damaged. We thus would like to emphasize on the fact that is it important, while cleaning the product, that no water gets inside the whole.

And while, of course it's upsetting to discover mold in a relatively expensive toy, like the spokesperson states, there are ways to prevent mold growth. Because Sophie does have holes on her body, it's crucial to oversee that no water or moisture gets inside the toy, especially when cleaning.

In another statement obtained by NBC, a Calisson spokesperson insisted that, "based on the assessment the 'Sophie la Girafe' quality department can make from the pictures shown in the [Good Housekeeping] article, it is not possible that saliva could cause the type of mold formation shown in the pictures."

So, as long as you're properly cleaning and drying little Sophie, she should remain mold-free. Of course, if you have any issues make sure to contact the company and see if a return is possible.