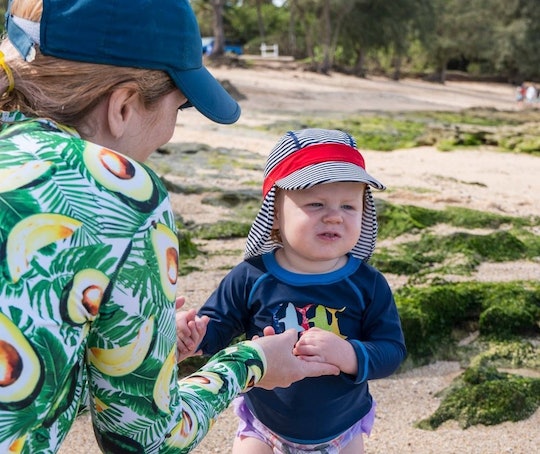 You’re Keeping Your Kid’s Skin Safe, But What About Your Own?

There's a line in a song by LCD Soundsystem that about sums up my twenties, "I wouldn't trade one stupid decision / for another five years of life" — except I certainly wish I could take back some of that sun exposure. I ~may~ have been careless about the sun for a hot second. I never stepped foot in a tanning salon, but only put sunscreen on where I could reach to apply it. I wore a hat... except when I forgot it. A decade later, I had a basal cell skin cancer removed, then became a mum. Suddenly, I had no time for carelessness — I needed to be around forever for my kids! I got very serious about sun protection, putting together a wardrobe of UPF-rated clothing and hats, hiding from the sun whenever the UV Index got above a 4, and investing in whatever sunscreen Nicole Kidman or Elle Macpherson had endorsed. The news for a rueful parent like myself is good. If you want to reduce your risk of skin cancer, the very behaviors you are likely teaching your child can make a world of difference.

"Twenty-five percent of sun damage is done by the time we are adults," Dr. Elizabeth Hale, a dermatologist with a fellowship in skin cancer, tells me, "so it's not too late to make a difference." In fact, she says, some of the most promising studies on skin cancer prevention focus on older populations, such as a longitudinal study of Australians published in the Annals of Internal Medicine that found participants in their 50s and 60s who wore sunscreen daily had lower rates of skin cancer and photo-aging than those who used sunscreen intermittently. "My kids know I put it on everyday, even when it's raining and snowing," Hale says.

Skin cancer tends to start showing up in your thirties, but if you are proactive — if you use a broad-spectrum sunscreen, wear photo-protective clothing, sunglasses, and a hat, keep out of the sun when it is at its strongest, see a dermatologist, do regular skin checks, and tend to your diet and health — you can reduce your risk of skin cancer. It's important, say the experts Romper spoke to, that we bust the myth that childhood is the only time you can have a meaningful impact on sun exposure.

"There is no bad point in time to start intervening," Dr. Emilia Javorsky, a physician-scientist and chief scientific officer of Sundots, a nutritional supplement, says over the phone. "If you intervene and start reducing how much you are exposed to the sun, as a consequence, you decrease your risk."

Jovorsky is crowd-funding the first photo-protective gummy on Indiegogo with CEO Chris Tolles. The gummies contain polypodium leucotomos — an extract found in ferns native to Central America, where it has long been used for a variety of skin conditions in folk medicine. It is not, as my husband posited, a magic pill to allow you to walk under the sun, unburned. It is a new tool that people might consider adding to their holistic plan to prevent against sun damage. And there is hard science around the short-term benefits, especially regarding the inhibition of proteins linked to skin cancer. One study published by the Journal of American Academy of Dermatology found 76 percent fewer new sunburned cells in patients who took polypodium. After speaking to Tolles and Javorsky, I impulse-ordered a three-month supply — I guarantee Sundots are on the shelves at Free People next to the rose-quartz drink bottles within three years. In my thirties, my general approach is me standing out the checkout, announcing, "I will take all the science." I just wonder why it took me until I became a parent to get super serious about my skin.

"Part of the reason we are less sensitive to skin protection issues is that we think of it as a disease of aging," Tolles tells me, "even though skin cancer is the most common cancer for 24- to 29-year-olds in the U.S." He and Javorsky decided to make the vitamin a gummy, so people would actually take it every day. "Sun protection is a pretty modern concept," he says. "We haven't understood for that long that it is a risk."

Tolles tells me that of the clientele interested in Sundots, 'one is more passionate about health, a little more likely to have a family.'

Skin care has arisen as the next great frontier for #selfcare in the past year, and yet sun protection still seems curiously fringe — one part of a nine-step beauty regime that focuses on nighttime infusions of moisture and a "daily" sunscreen (as opposed to, say, an every-two-hour sunscreen). Photos of models on fashion and skincare websites are still bathed in sunlight. Tans are still in. Freckles are cute. Anecdotally, the clients most interested in protection from sun damage at the nation's dermatology offices are women concerned about protecting their looks (who have lower mortality rates from melanoma, in part due to early detection, as Hale notes). Tolles tells me that of the clientele interested in Sundots, "one is more passionate about health, a little more likely to have a family," while the other is interested in the aesthetic benefits — in beauty. As someone who would rather not look like a handbag, but is more concerned about staying healthy for her family, I'm not surprised that parents are the best audience for a sunsmart message.

Still, the best way to avoid sun damage is to reduce your sun exposure, and I'm surprised how few parents do this. I have yet to hear a radio announcer mention the UV Index when they give the day's weather, and if I visit any beach on the Atlantic during summer, I am guaranteed to see dozens of bodies lying out in the sun, even in the middle of the day, while I hide under my umbrella looking scornfully out at the sunshine. Even among those who are wearing clothing or a hat, it's rare to see clothing out of the water rated for UPF protection — the designation for UV-proof fabrics, with a UPF 25 garment letting 1/25th of the sunlight through, and a UPF 50 garment letting 1/50th of the sunlight through.

One of the best "purchases" I have made in the past year (I put it on my Christmas list) was matching avocado UPF 50 swimmers from Mott50 for me and my daughter. They cover our entire upper body, and also, you know, are covered in avocados. “Sun damage is cumulative over your lifetime — so it’s never too late to begin sunsmart behavior and halt the signs of aging," Anne Reilly, CEO and founder of the millennial-pitched Mott50, tells me by email. "In addition to wearing sunscreen, sun-protective clothing is the easiest and most effective way to prevent sun damage." Rash tops have become more commonplace, but Mott50's range of UV-proof rompers, dresses, and lounge pants is the most fashion-forward of UPF offerings on land.

Elsewhere, I bought the super lightweight UPF 50 Tropic Comfort Hoody from Patagonia, a long-sleeved hoody for hot summer days — Patagonia calls the fabric technology "wearable sunscreen." (And yes, they make one for little tots, too.) The idea that you should cover your skin on a hot day is, I sense, a little wild, but when you put it on, it's so silky and comfy, you immediately want to order them in every color. And knowing that my fair, ginger babies will see how I protect against the sun and copy those behaviors has been the best motivation to get serious about sun exposure yet.

People associate sun damage with summer, with the beach, when in fact they should be using sunscreen year-round.

Amazingly, sunscreen has still not been fully adopted by Americans. Sonia Hounsell, a representative for Coppertone, is walking me through the full range of sunscreens — from zinc to spray-on to sport to kids' options designed to be applied while chasing tiny slippery runaways — and tells me that part of the effort is "trying to promote usage occasions that aren't the typical beach and pool." People associate sun damage with summer, with the beach, when in fact they should be using sunscreen year-round. Meanwhile, research by ZEISS Vision, which has introduced the first clear UV400 protectant lens, found that only one in five adults wear sunglasses, and only 13 percent are aware that skin cancer around the eyes is a potential side effect of not wearing UV-filtering sunglasses.

Growing up in Australia under a mean sun, I have memories of my parents chasing me with the SPF 15+ and an aqua-blue corduroy surf hat; of the rash tops I stretched over my awkward teen bod, though my parents' behavior was often less-than-sunsmart. When I was in middle school, Australia began a historic public campaign to educate the country on sunsmart behavior ("slip on a shirt, slop on some sunscreen, slap on a hat" and "between 10 and 3, stay under a tree"). The effect of the campaign was clear: the rate of invasive melanoma fell from 49 cases per 100,000 people to 48 per 100,000 between 2005 and 2011, as the Sydney Morning Herald has reported, making Australia the only nation among the six studied to see a decrease in rates of melanoma.

And solar radiation is getting worse. The ozone layer continues to thin over populated areas of the globe, as was recently reported by USA Today, which means a greater amount of UV light is getting through.

In 2018, even as we dot 'glow' serums on our forehead and cheekbones, and drop serious penny on retinol creams, shade is still radical.

If you visit a schoolyard or public swimming pool in Australia, you will see swaths of shade-cloth stretched overhead, protecting teens and tots alike. Hats are required for a student to be allowed outside to play at lunchtime, public beaches have free sunscreen dispensers by the lifeguard's office, and malls have Cancer Council stores in them selling sun-protective clothing and sunscreen. People have been trained to seek shade. It is, as we say, a paradigm shift.

Meanwhile, melanoma rates have been trending up in the U.S. for the past 30 years, as data from the American Cancer Society show. One million basal cell skin cancers will be diagnosed in the U.S. this year, per the American Cancer Society. Purple is still a skin color you will see in beach towns. There still really isn't a stigma around tanning, if you glance at the sea of bare skin in #coachella Instagram posts. In 2018, even as we dot "glow" serums on our forehead and cheekbones, and drop serious penny on retinol creams, shade is still radical.

Millennial parents are the best audience for sunsmart messages. We are already concerned about our children's health, and also a cohort likely to benefit greatly from the adoption of sunsmart behaviors; old enough to have experienced sun damage, and young enough to radically reduce our lifetime exposure. "Don't be depressed if you were careless when you were younger," Hale says.

The message for parents like myself, who might have spaced on sun protection in the past, is that now, even as you spend your days chasing your kids and worrying about their skin, you should carve out time for this form of self-care to feel better in yours.

More Like This
Everything Parents Need To Know About Monkeypox
Sex And Mom Guilt: When I Date Someone New, Am I Cheating On My Kids?
The Morning Rush Is Parenting At Its Most Essential
9 Reasons Why Some Women Can't Breastfeed