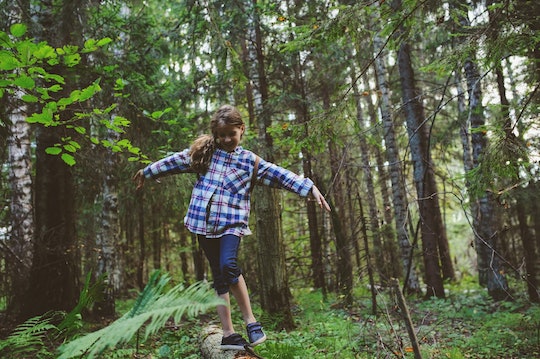 How To Prevent Tick Bites & Keep Everyone Safe This Summer

I have no desire for myself or my children to become the unwilling blood buffet to a parasitic insect that could potentially carry any number of diseases. That's why it is essential that I know how to prevent tick bites. Otherwise, I am just a walking meal plan for the tiny creatures, and that is just not a possibility that I am cool with.

There is definite reason to worry about the tiny hemoglobin-loving fiends of the insect world. The most common tick-borne illness is Lyme disease, which typically presents with fever, headache, fatigue, and a skin rash that resembles a bullseye called erythema migrans, according to the Centers for Disease Control and Prevention (CDC).

Lisa Asta, M.D., spokesperson for the American Academy of Pediatrics and a clinical professor of pediatrics at the University of California, San Francisco, told Consumer Reports that Lyme disease isn't the only one to worry about, and noted that “We’re seeing newer pathogens from other areas that we did not used to have to concern ourselves with.”

New and novel pathogens, and the risk of infection, is why it's essential that we all know how to prevent tick bites. The CDC's recommendations are fairly straight forward: avoid areas where ticks may live, such as tall, grassy, areas or brush. Wear long sleeves and pants if you're in those areas, and wear a DEET-based insect repellent.

The CDC also noted that it's possible to treat your gear and your clothing with a chemical called permethrin. It's not something that you would spray on your or your child's skin directly, but instead, it is a treatment used on their clothing (do not spray their clothing while they're wearing it) or tent. It kills ticks on contact, which gives you a little bit of an idea of how strong a chemical it is.

Repellent is only one part in how to prevent tick bites. The American Academy of Pediatrics (AAP) wrote that it's important that during tick season, if you're going to be out and about where ticks are present, that you don't bathe with scented soaps, or use perfumes. These are a siren's song to the evil little vampire insects. They also wrote that children under 2 months of age cannot use DEET, so keep them under mosquito netting and far away from tick-infested areas as much as possible. For children over 2 months, use a DEET product with a 10 to 30 percent concentration. Apply the DEET after you've applied your sunscreen for maximum safety.

When I was a counselor at a summer camp, we were vigilant against ticks because of where we were located. Deep in the woods along a natural creek, wildlife was plentiful, as were ticks and mosquitos. The biggest thing I learned about tick bite prevention over those summers was to stay on the center of the trail, away from the brush at the edges, and not to go near the fresh water supply at dawn and dusk, when the deer were most active.

The more covered your body is, the less likely you are to be bitten by ticks. For the summertime, it's a great idea to invest in a lightweight set of long sleeved shirts, pants, and socks, as well as a hat. The only place I've ever found ticks on my body has been in my hairline when I've forgotten to wear a hat. It is not an experience that I will soon forget.

The last bit of advice is one that is echoed all over tick territory, and that is to make sure that as soon as you step indoors, you take off your clothing and check for ticks. If your clothes are otherwise clean, it's still best to throw them in the dryer to heat them up, killing any ticks you may have missed. Check yourself, your partner, and your children from head to foot, making sure you don't miss their scalp, behind their ears, or in the folds of their skin. Ticks can be incredibly small, so it helps to use a little flashlight to guide your search.

The fear of ticks should not put you off your summer fun, but it is something to consider as your kids play outside.