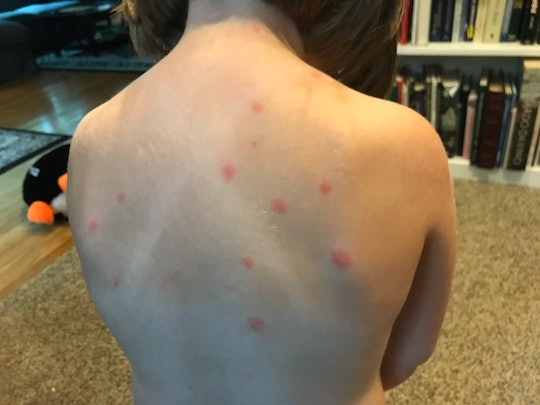 How To Protect Children From Mosquitos, According To An Expert

Summer is here, which means most of us are enjoying some sunshine, much-needed vacations, and living in constant fear of mosquitoes and the swollen, itchy welts they bring. What can be done about these winged miseries? Is there a way to protect children from mosquitos, or are those nasty, itchy bites an inevitable part of summer break?

Romper spoke to Dr. Kara Wada, allergist and immunologist at The Ohio State University Wexner Medical Center, to learn how parents can better help their children avoid mosquito bites during the summer months.

Here in the United States, mosquitoes are generally more annoying than they are dangerous. Yes, those itchy bites are irritating and unsightly, but, at the end of the day, we're generally no worse for the wear. That's not to say, however, that mosquitoes cannot be a true menace.

"Depending on where you are in the country, certain viral infections can be quite serious that can be transmitted through mosquito bites," Dr. Wada tells Romper via phone. Viruses that cause encephalitis and meningitis — inflammation of the brain and membranes that surround the brain and spinal cord respectively — such as West Nile Virus, can be fatal.

West Nile is the leading cause of mosquito-borne disease in the continental United States, according to the Centers for Disease Control and Prevention (CDC). While fatal cases tend to be at the top of the news, the truth is that 80 percent of people who contract the virus will ultimately be asymptomatic. Most of those who show symptoms will experience things like high fever, fatigue, neck stiffness, and disorientation, but generally recover with no lingering problems.

There's also an illness known as "Skeeter Syndrome," which is marked by a low-grade fever and generally feeling pretty crummy in response to a mosquito bite. It's rare (Dr. Wada says she hasn't personally seen a case in her practice) and resolves within three to 10 days.

If you expect to be outside for an extended period, long sleeves and pants in cooler fabrics, such as linen or cotton, will go a long way to preventing bites.

Another more serious consequence of mosquito bites is infection. Dr. Wada points out that scratching the welts caused by bites (and who can blame you for that?) can open up the skin, exposing the wounds to bacteria. So scratch with caution, folks.

But even without scary illnesses and bacterial infection to worry about (and, of course, we worry about them, because we're parents and that's what we do), the typical welts caused by bites, a local reaction to the mosquitoes saliva protein, are enough to prompt us parents to action. "The red itchy welts ... can occur on a spectrum," Dr. Wada explains. "For some people, the bumps can be quite severe and profound ... over five inches in diameter." So put just a few of those bites together and you have some people with large areas of uncomfortable swelling.

Wada also suggests that age seems to play a factor reactions to mosquito bites. "It is not uncommon to hear younger children having more significant welts compared to adults," she says. The good news is continued exposure can mean your body becomes more used to the saliva protein and that one's reactions can become lessened over time.

If you find that you or your child is experiencing particularly uncomfortable mosquito bite welts, there are things you can do to alleviate the symptoms. Dr. Wada suggests long-acting antihistamines, such as Allegra, Zyrtec, or Claratin, can be helpful, as well as topical application of hydrocortisone cream. (Of course, always be sure to check the label to ensure the safety and proper dosage for your child.) For really bad local reactions, she says, especially if it's on a sensitive area where you may not want to use topical relief (near the eye, for example) you may want to see your pediatrician, who can prescribe a short course of an oral steroid, such as prednisone, if called for.

But as with any other ailment, an ounce of prevention is worth a pound of cure. If you expect to be outside for an extended period, long sleeves and pants in cooler fabrics, such as linen or cotton, will go a long way to preventing bites. (Mosquitoes can bite what they can't access!) DEET-containing bug repellent has been proven especially useful in warding off mosquitoes, though whether you can use bug spray (and how much) will depend on your child's age.

You can also try to avoid mosquitoes all-together by knowing their habits and keeping the family inside when they're most active, which will depend on where you live and what species are most common there. (There are about 176 species of mosquito in the US!) Of course, this may not go over well with kids who just want to go out and play.

"It's always a little bit hard: it's summer!" concedes Dr. Wada. But mitigating risk and knowing how to treat the symptoms of mosquito bites can help make your summer more enjoyable... and less itchy.