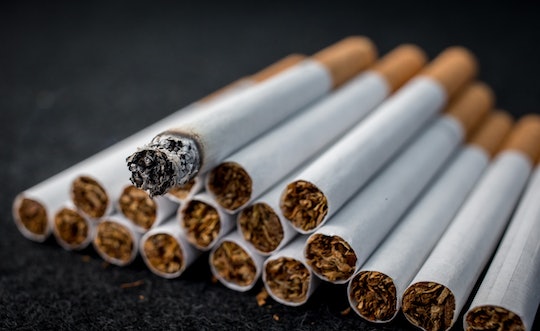 How To Protect Kids From Thirdhand Smoke

It's natural for parents to worry about the effects that cigarette smoke can have on their children, and for parents who regularly smoke cigarettes themselves, it can be a real challenge to make sure their kids don't come into contact with secondhand smoke. Unfortunately, a new study just discovered that this task may be more complicated than everybody originally thought. Now not only do parents need to be concerned about secondhand smoke and its damaging effects on kids, they have to be concerned about the effects of thirdhand smoke as well. But just how should parents protect kids from thirdhand smoke and keep nicotine out of their systems?

A study recently published in the BMJ journal Tobacco Control and conducted by researchers at Cincinnati Children's Hospital Medical Center and San Diego State University discovered children may be carrying "significant levels of nicotine on their hands," according to Science Magazine. The study involved 25 children who came into contact with thirdhand smoke. They were able to absorb these significant levels of nicotine on their hands simply by coming into contact with something that held tobacco smoke residues. While adults have been mainly concerned with smoking in the same vicinity as children, it's becoming apparent that the children don't even have to be present at the time a cigarette is being smoked for it to be harmful to them.

To be able to protect your kids from thirdhand smoke, first you must fully understand what thirdhand smoke is. The Mayo Clinic defines it as "residual nicotine and other chemicals left on a variety of indoor surfaces by tobacco smoke," as well as stating that the tobacco residue "is thought to react with common indoor pollutants to create a toxic mix. This toxic mix of thirdhand smoke contains cancer-causing substances, posing a potential health hazard to nonsmokers who are exposed to it, especially children." Thirdhand smoke has the ability to remain on things such as hair, skin, clothes, furniture, drapes, walls, carpets, and even dust long after a cigarette has been smoked. Children are at such a high risk because, as all parents know, they're prone to touching pretty much everything.

The study also found that the presence of nicotine on children's hands was associated with significant levels of cotinine in their saliva. According to the Centers for Disease Control and Prevention (CDC), cotinine is a product formed after nicotine enters the body and can help determine nicotine exposure. The CDCD reports that exposure to nicotine and continine, especially in children, can cause an abundance of health problems, such as respiratory infections, asthma attacks, ear infections, and more. Once kids touch a household item that has been exposed to tobacco residue, they are able to absorb the nicotine by putting their contaminated hands in their mouth.

So what can be done? It's hard to say exactly what might prevent kids from being exposed to any nicotine at all or whether certain cleaning methods prevent this from happening, but one surefire way to keep them safer, at least, is to avoid smoking anywhere your child might have access — even if you smoke by the door or a window, it's still very possible they're going to get some of that residue on their hands and in their system. When in doubt, take it outside (or, if you were planning on quitting, now might be a good time to push yourself, for your kids' sake).

Melinda Mahabee-Gittens, MD, a co-investigator on the study and a physician in the Division of Emergency Medicine at Cincinnati Children's, stated that this was the first study "to show that children's hands hold high levels of nicotine even when parents are not smoking around them." It's an incredibly important discovery, because it highlights the far ranging affects smoking tobacco can have. "Parents may think that not smoking around their child is enough, but this is not the case," she said. "These findings emphasize that the only safe way to protect children from smoke exposure is to quit smoking and ban smoking in the home."

It's no easy task to quit a substance as addictive as tobacco, however, this study truly shows the importance of keeping kids away from tobacco exposure. Even smoking when your kids aren't home can still have damaging consequences on them. As Mahabee-Gittens points out, the only way to really protect children from thirdhand smoke is to keep tobacco out of the home entirely.