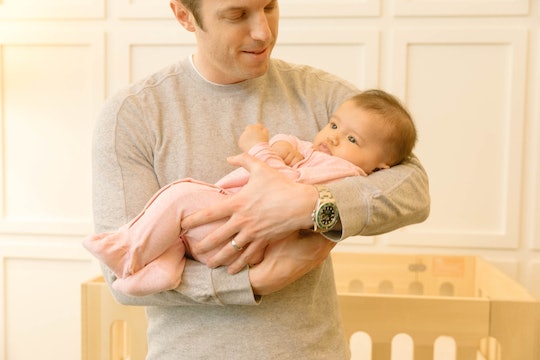 Before becoming a parent, there was no way to prepare yourself for the fierce love and protection you would feel as a result of the job. Whether it's a scraped knee or not-so-nice-kid at a playdate, it's normal for a parent to want to keep their kid safe from pain or hurt feelings. But it's probably not at the forefront of your mind to think about protecting their social security number and credit report, right? Well, it turns out you might want to think about it a bit. Here's how to protect your child's social security number and keep out nosey identity thieves.

Ayana Miller, founder of Privilgd, tells Romper in an email interview that the first thing to do is keep your child's digital footprint as small as possible. "Minimizing your child’s digital footprint will help decrease the chances that their information is involved in a breach or gets into the wrong hands," Miller says. "One of the best ways to minimize their digital footprint is to clean up after your digital activities."

For example, Miller says, if you no longer frequent certain websites but setup an account on that website at any point, request that it be deleted. "Otherwise, the data you shared with that website (such as your child’s social security number) may persist based on that company’s privacy policy."

Miller says you might also want to consider setting up fictitious online identities for your child. "Unless a website has policies around using a real name and/or identity verification, then you should feel free to create a fictitious online identity for that account, especially when it involves your child." Miller explains that even some sites that comply with the Children's Online Privacy Protection Rule (COPPA), like YouTube Kids, don't need your real identity in order to be used. "Use a fake first and last name and dummy email — an email just for gaming apps, registrations, and advertising — to ensure your child’s personal information is protected.

This leads into the next idea which is limiting the information you share to the kind that is only on a need-to-know basis, Miller says. "When you share your child’s information with companies (online and offline), don't be afraid to question why they need the data," she says. "You'll likely find out that they don't actually need it. They would love to have as much personal information as you're willing to share, but that doesn't mean they need it in order to offer their service."

Logan Strain, a security and technology analyst for TruthFinder, tells Romper in an email interview that it's also important to keep in mind that credit reports for children are almost never checked, which makes their hacked social security information extra valuable for identity thieves, who can exploit a child’s identity for years before their fraud is discovered.

"The best thing parents can do?" Strain says. "Pull their child’s credit report regularly." According to Strain, asking a credit bureau for a minor’s credit information requires you to prove that that you’re their guardian, but it's the only way to discover potential problems. "Ideally, parents should check on this when they pull their own credit report every year," he says. "Credit bureaus don’t keep credit information about children younger than 13, so that’s a good age to start."

With that in mind, Strain says no credit information for your child means there’s nothing to worry about. If you do notice something suspicious, then it's important to take action immediately before any possible fraud gets worse. "In 29 states, parents or legal guardians can even freeze a child’s credit report if something shady is uncovered," he says.

Just another way in which you can exercise your supermom powers and protect your little one.