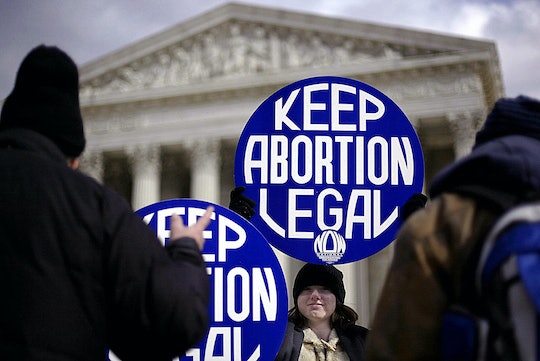 How To Protest HR 586, The Personhood Bill

As Congressmen continue to attack reproductive rights through the introduction of legislation aimed at undermining the sanctity of Roe v. Wade, one bill in particular could effectively ban abortions "without exception" throughout the U.S. If passed, H.R. 586 — introduced to the House earlier this week — would legally define the beginning of life as the point of fertilization. This would make it a lot easier for anti-choice political leaders to ban abortion from the get-go. Here are some ideas for how to protest H.R. 586, yet another piece of legislation aimed at stripping away reproductive rights.

Abortion is, first and foremost, still a constitutionally protected right in the United States for the time being. It is the right of every person to make informed decisions about their own bodies, medically and otherwise. The constant attack on abortion, which has been ongoing for at least the last 40-some years after Roe v. Wade made it federally legal, appears to be part of conservative agendas to control women's bodies. These agendas also often include access to birth control, emergency contraception and now, access to preventative screenings provided by clinics like Planned Parenthood. This latest bill could end up being one of the most restrictive in history, if Congress decides to pass it.

H.R. 586 specifically deals with the "defining life" piece of the argument. Anti-choice advocates have long used certain elements of medical science to their advantage, conflating terms like "potential for life" and "viability." The larger argument, trying to decide when personhood begins, has been a subject of philosophical inquiry for all of human history. Science knows a lot more about fetal development than it did even decades ago when Roe v. Wade was passed. That research does not, however, make definitive pronouncements about when a developing fetus is considered a person.

Women and allies all over the world came together after the inauguration to protest not just the ongoing attack on reproductive health by the U.S. government, but the larger injustices that effect more than just women. For those who want to find a way to protest H.R. 586 specifically, in their continued efforts to speak out against this harmful agenda, there are many avenues to pursue.

First and foremost, check the list of co-sponsors for the bill. While it was introduced to the House by Congressional Rep. Jody Hice, as of Thursday it has 23 additional sponsors. If you're in the constituency of those representatives, get in touch with their office. If you're not sure what to say, reference this Reddit post that offers a script for when you call. Continue to educate yourself about the facts regarding what's known about fetal development, viability, and the consequences of banning abortions.

History has shown that you can't ban abortions — you can only ban safe abortions. The consequences extend not just to individuals, but to the very unborn that are supposedly "protected" by these laws. Birth defects, genetic conditions, and birth injury can all not only bring astounding grief to families, but can cause infants to be born into a life that is nothing but physical pain.

If those who claim they're trying to "give every life a chance" actually took the time to educate themselves on the array of scientific research, not just what advanced their platform, they would see their justification undermined by fact. It certainly begs the question: who are these bills really meant to serve?