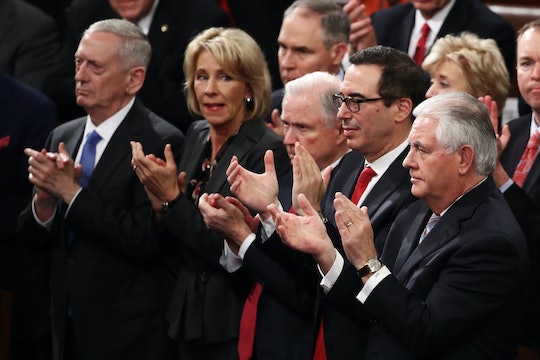 How To Protest H.R. 610 Effectively

The confirmation of Education Secretary Betsy DeVos was so polarizing that it resulted in an unprecedented tiebreaker, with Vice President Mike Pence voting in her favor. But now that she holds the role, it's not entirely surprising that H.R. 610 — otherwise known officially as the "Choices in Education Act of 2017," — is grabbing Americans' attention. The bill, sponsored by Iowa Rep. Steve King, seeks to limit the federal government's role in education, and champion school vouchers, leaving many parents and teachers concerned about the future of public education. If you're worried too, here's how to protest H.R. 610 effectively, because you need to make your position known.

About a week into her new position, DeVos discussed some of her controversial opinions in an interview with Axios, including the notion that the federal government may no longer have a role to play in education at all. As for her vision for the future? DeVos told Axios that she hopes the educational landscape will change:

One thing now seems certain: if H.R. 610 passes, a DeVos-style education system will be much closer. But more importantly, the bill itself is expected to have a significant impact on America's public school students. That's because H.R. 610 will "repeal the Elementary and Secondary Education Act of 1965 [ESEA]," which was re-authorized as the Every Student Succeeds Act (ESSA) under President Barack Obama (and had been known as the No Child Left Behind Act under President George W. Bush). According to the U.S. Department of Education, the ESSA promotes equity and upholds federal protections for disadvantaged students, including Title programs, anti-discrimination regulation, and school safety. After it's repealed, H.R. 610 would then enforce limits on the scope and authority of the Department of Education, so that it would essentially only become a vehicle for awarding state grants.

That's not the only major change, however. H.R. 610 would also institute a controversial national education voucher program, which would provide funding for states to be given out to parents who choose to enroll their children in private schools, or to those who home-school their children. Advocates of voucher programs and so-called "school choice" argue that, by making private schools more accessible, vouchers help disadvantaged children whose local public school may not be the highest-quality option. But critics have argued that not only would it be more beneficial to support the public schools instead, they've also noted that, in states where voucher programs are already in place, a substantial number of school voucher recipients aren't even disadvantaged kids, but children living in wealthy neighborhoods, many of whom have never even attended public school before.

Unfortunately, dismantling student protection and promoting school vouchers isn't even the end of H.R. 610's proposed changes. That's because it will also introduce what's being called the "No Hungry Kids Act." While that sounds like a really positive development (who wouldn't support something calling for no hungry kids?), the reality is actually pretty baffling. The No Hungry Kids Act would replace the Obama administration's Healthy, Hunger-Free Kids Act, which was meant to improve child nutrition by requiring schools to adhere to nutrition standards that emphasized fruits, vegetables, and whole grains as part of the National School Lunch Program and the School Breakfast Program. But in a 2015 press release, King argued that the nutrition guidelines were detrimental, and claimed the Act's upper calorie limits were leaving students "hungry during the school day because of calorie rationing." King said,

The USDA has set a calorie limit on school lunches. The goal of the school lunch program was — and is — to ensure students receive enough nutrition to be healthy and to learn. The misguided nanny state, as advanced by Michelle Obama's ‘Healthy and Hunger Free Kids Act,’ was interpreted by Secretary Vilsack to be a directive that, because some kids are overweight, he would put every child on a diet. Parents know that their kids deserve all of the healthy and nutritious food they want.

My 'No Hungry Kids Act' prohibits the USDA from rationing calories to our children, so schools can serve our students as much nutritious food as they want, so that our students can grow and learn and excel, in school and out of school — in the classroom and on the playing field.

A 2016 JAMA Pediatrics study of the Healthy, Hungry-Free Kids Act though found that, in the first five years of the program, student lunches did in fact become much healthier, and, more importantly, that roughly the same number of students were eating the healthier meals as the previously-unhealthy ones, according to TIME. That sounds like a pretty big win, but if H.R. 610 passes, the current rules regarding student nutrition will likely no longer apply.

So what can you do if you want to push back against the bill? The best course of action is to call your government representatives. Of particular importance would be calls to King and the bill's co-sponsors, Arizona Rep. Trent Franks, Maryland Rep. Andy Harris, and Texas Rep. Pete Olson. Not sure who represents you? You can search by zipcode here, or call the Capitol Switchboard at 202-224-3121, where an operator will connect you to the appropriate office.

What should you say when you call? State your name and the city you are calling from, and let them know that you would like to urge your representative to vote no on H.R. 610. And make sure to remind them why it's important, too: maybe you believe in the ESSA, or you want to make sure all students are protected. Or perhaps you want to support public education, or you don't want student lunch programs to take a hit. Whatever the reason, let it be known, and if you get a busy line or a full voice mailbox, try again tomorrow. Even if you do get through, why not call again as often as you can until your rep agrees to take a stand? You may not like what's happening in Congress, but you have every right to speak out about it.