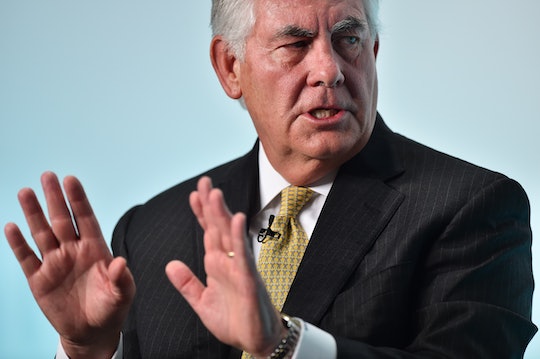 How To Protest Rex Tillerson As Secretary Of State

On Dec. 13, President-elect Donald Trump named Exxon Mobil chairman and chief executive officer Rex Tillerson as his secretary of state, leading many to raise their eyebrows — or just straight up panic. According to the Pew Research Center, if Tillerson does join Trump's Cabinet come Jan. 20, he would be the first secretary of state without any military or governmental experience, making his lack of experience downright historic. If you're concerned about his appointment to one of the most important positions in the Cabinet, here's how to protest Rex Tillerson's appointment before it becomes permanent.

"His tenacity, broad experience and deep understanding of geopolitics make him an excellent choice for Secretary of State," Trump said in a statement in early December, according to The Wall Street Journal. "Rex knows how to manage a global enterprise, which is crucial to running a successful State Department, and his relationships with leaders all over the world are second to none."

According to a study carried out by the Pew Research Center, Tillerson wouldn't be the first secretary of state to come from a business background — in the past, at least four others were executives of large businesses before they became secretaries of state. However, they all had prior experience in high-level government or military roles, as well, and Tillerson has spent more time in the private sector — having 41 years at Exxon Mobil under his belt — than any secretary of state has.

Luckily for Americans who aren't quite OK with an oil magnate leading foreign politics, the Senate does have to confirm Trump's pick for secretary of state before he lands the role, which means there's plenty of room for protesting. Here's how you can make your voice heard:

According to the Rainforest Action Network, you can call your senators to ask them to vote against Tillerson's appointment. To do so, call (202) 224-3121, press 1 to contact senators, then enter your zip code or say what state you're in. Alternatively, you can find your senators on this list and either write them or call them to express your opinion. Remember, senators are meant to represent their constituents, so make sure your voice is heard.

Trump's secretary of state pick is so unpopular that there are many, many petitions out there just waiting to be signed. You can sign 350's petition against Tillerson, or Greenpeace's, or the Sierra Club's, or Climate Truth's, or all of them.

Seeing a large group of people join together for change is powerful, as the Standing Rock Sioux proved this year. Find a protest against Rex Tillerson in your city or start one of your own, and invite media to come and report on it. Better yet, invite your senators to attend.

Seeing your relatives during this holiday season? Ask them if they know about Tillerson. Sharing something on Facebook? Why not make it helpful information about Trump's secretary of state pick? Tweet at your senators. Encourage your friends to call their senators, too — because unless people are informed, they won't know that they need to speak out, and if people want the government to represent them, they need to be loud about it.

Let's make this the year we get super involved in politics and encourage others to do the same. A good starting point? Protesting Tillerson's appointment, if you feel so inclined.