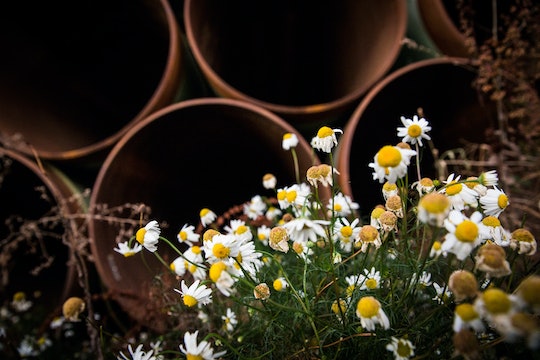 How To Protest The Keystone XL Pipeline

On Thursday, TransCanada submitted a new presidential permit application for the Keystone XL pipeline, making it clear that with President Trump in power, the company does indeed plan to move forward with the project, which would shuttle 800,000 barrels of oil from Alberta to the U.S. Gulf Coast on a daily basis. According to the Associated Press, the previous administration originally nixed the pipeline, citing the United States' climate change goals. Now, however, it's back on — and activists might be wondering how to protest the Keystone XL pipeline, now that Trump has made his interest in approving the pipeline clear.

In case you missed the original protests against the Keystone XL pipeline, here's a quick summary. The 1,661-mile pipeline would run from tar sands in Alberta all the way down to refineries in Texas and carry hundreds of thousands of barrels of oil a day. According to Mother Jones, however, that oil would have a 20 percent higher carbon output than most conventional oil supplies, making it not-the-most-eco-friendly energy and leading many to protest its creation. In fact, people have been calling for the Keystone XL project to be killed since 2010, and according to The Chronicle Herald, over 1,000 people have been arrested while protesting the pipeline.

The fight seemed to be over when Obama halted the project, but it seems the need to protest is back on. Here's how you can make your voice heard concerning the Keystone XL pipeline.

Join A Protest In Person

There's nothing like seeing millions of people march in protest to show the world how citizens feel — we've see that repeatedly with Dakota Access pipeline protests, the Women's March on Washington, and other demonstrations that drew photographers and media. Stand up for your beliefs at a Keystone XL pipeline protest in your city. Search for one in the "Events" tab on Facebook, see if anything pops up on Twitter, or create one of your own and spread the word.

There are a ton of old petitions out there on the internet asking President Obama to stop the pipeline — and guess what? All of those signatures, along with numerous protests, helped make Obama reject the Keystone XL pipeline in 2015. Do it again by signing a 350 petition to stop the pipeline, by asking Canadian Prime Minister Justin Trudeau to reject the pipeline, or by signing a Sierra Club petition that will be sent on to Trump.

Donate To Organizations That Oppose The Pipeline

Environmental organizations like 350, the Sierra Club, Oil Change International, and Greenpeace are fighting to get the Keystone XL pipeline rejected. Donate your time or money to these organizations to help the climate movement.

Remember, the government is supposed to make decisions that reflect the will of the people — so remind them as frequently and as loudly as you can that you oppose the Keystone XL pipeline.