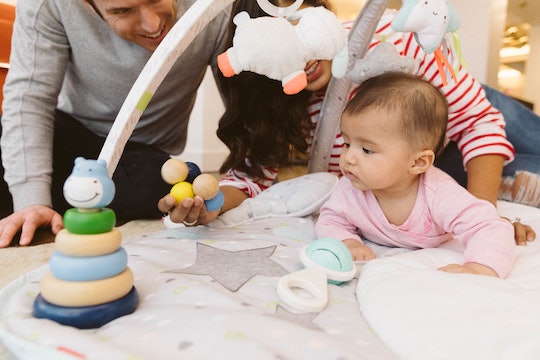 If Your Kids' Toys Are Taking Over, Here's How To Purge Them & Downsize

If you have ever whacked your knee on a dollhouse or found yourself with a teeny, tiny figurine underfoot, then you know just how overwhelming kids' toys can become. Whether your child has a surplus of all things with a motor or collects horse figurines like my animal-loving daughter, then chances are likely you have found yourself wondering how to purge toys. Because what parent who is trying to preserve some semblance of a household hasn't?

"The best strategy for organizing kids' possessions, whether toys, arts supplies or other items, is to allow the young people to participate in the process as fully as possible, as early as possible," Lauren A. Williams, a certified professional organizer at Casual Uncluttering, LLC, tells Romper in an email interview. "Keep it simple and age-appropriate."

For instance, Williams says you can let them test whether they can open the bins or baskets or drawers or whatever the choices are. "Let them choose whether the storage tools are color-coded, open or closed, labeled with words or pictures or photos, or all three," she says. By allowing children to develop their own systems for organization, they are able to discover the methods that work for them, which in turn ensures better success for keeping things organized.

Kirsten Fisher, the founder of Imagine Home Organization, tells Romper that the truth is, most children use only a small percentage of their toys. "Keeping a lot of toys in your home only guarantees they will use even fewer of them since they are hard to find and hard to manage," she says in an email interview. "Keeping a smaller number of toys and changing them more often is effective."

Steps to help you decide what to keep and what to toss include first sorting toys and other kid items into categories, "so you can see how many games, cars, dolls, Shopkins, Hatchimals, Pets, Pokémon cards, train sets, and blocks that you have," Fisher says. Once you do that, you can review the categories and immediately toss things that are broken, have missing pieces, or are not age appropriate. If there are full categories of things your child does not use (as a result of loss of interest or they've simply outgrown them), then consider donating the items.

Fisher says you should also ask yourself if there are categories that are overstuffed, too. "30 board games or 50 Matchbox cars?" she says. "Those can be edited to keep only the most used games, favorite cars, and so forth."

Once the easy part of purging is over, you'll have to make some more difficult decisions based on the amount of space you have, as well as the amount of room you want to dedicate to your kids' toys, Fisher says.

"Stuffed animals are a prime candidate for toys that kids sometimes use, but often have dozens or more of and take up a ton of space," she says. "Don't dwell on the emotion of donating toys that bring back great memories." Instead, Fisher says, take a photo or just say goodbye to open up room for new experiences. Be sure to also purge at least once a month in order to keep kids' spaces manageable.

"Involve your kids by letting them know that some kids don't have toys and they can make a difference for them," Fisher says. "Don't ask them which ones they don't want — give them choices and goals." For instance say, "Which game would you prefer to give to another kid who would love it — Connect Four or Candyland?" Fisher says you can also try: "There are 20 Matchbox cars in this overflowing bin. We need to give 10 to another little girl. Which ones do you want to give?"

Make sure to also keep timing in mind. Nancy Haworth, a professional organizer at North Carolina-based On Task Organizing, LLC, says purging is also a great activity to kick off the summer. "[Children] are ready to advance to a new grade level and let go of 'little kid' toys that they no longer use," she tells Romper in an email interview. "In a corner or closet, keep a bin for outgrown toys that they’d like to donate or sell. Your children can add to this throughout the year." Because year-round organizing with kids who cooperate sounds pretty perfect, right?