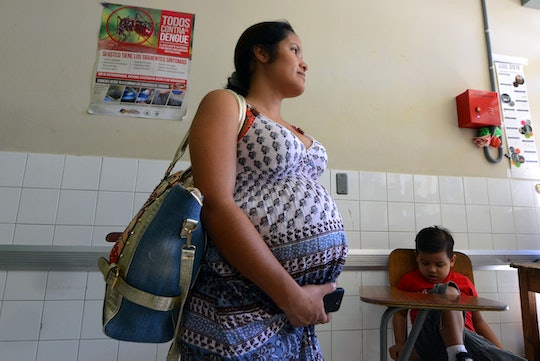 How To Push Congress To Approve Zika Funds, Because Mothers Can't Wait Any Longer

On April 29, the Senate broke for a week-long recess without addressing one of the important issues on the table: funding to fight the Zika virus. According to The Atlantic, the White House had asked Congress for emergency funding of $1.9 billion for research, mosquito control and surveillance, and vaccine development. Still, the Senate was split, with Democrats generally arguing for the funding, and some Republicans suggesting that funding previously approved for the Ebola crisis be used to fight Zika. If you agree with the former camp, here's how to push Congress to approve Zika funds when they get back from their 10 days away.

If you haven't been tuning into the Zika news, there are probably a few things you've missed. Recently, Brazilian scientists found that the virus might be even more dangerous than previously thought. While Zika only shows flu-like symptoms in one in five adults who contract the virus, its threat to pregnant women is much worse: In up to 20 percent of pregnancies in which the mother contracts Zika, the babies go on to suffer neurological damage to different degrees, including microcephaly, problems with their vision, and other severe brain defects. Developing countries who were hit early by the virus are now scrambling to contain its effects.

The United States hasn't had to deal with Zika too much yet — but with warmer months approaching, it's better to be proactive than reactive, and that starts with influencing Congress.

First of all, remember that representatives in Congress are there to represent the people (or at least, they're supposed to be). You can — and should — contact your elected representative, letting them know why you think emergency Zika funding should be approved. If you have no idea who your Congressional representative is, never fear. You can use Contacting the Congress to find out who your representative is by entering your address, and the website will provide you with a link to their contact form and their D.C. phone number. Include a message that details why you're concerned about Zika and how you think your Congressional representative can help. Need some inspiration? Check out this sample letter from a Care2 petition, or read through President Obama's letter to Congress.

There is also already a petition for Congress to approve Zika funding, and it has more than 14,000 signatures on it so far. Adding your own signature to the pile will take little time, but will show Congress that a growing number of Americans are concerned about the threat of Zika to pregnant women and to the population, generally. After you've signed, share the petition through social media to bump those numbers up a little higher. (You could also start your own petition, but unless you disapprove of something in the existing one, I'd suggest sticking with it — there's power in numbers.)

Speaking of social media, advocacy is one of the best uses of our awesome internet age. Using Twitter and Facebook, let people know how you feel about Congress' stalling on Zika funding. Share stories and information on why Zika's a threat and why you're concerned. Tag Senators whose attention you wish to capture, write on their Facebook pages, or create a Facebook page that will capture the public's attention. Elected officials don't like bad press, and starting a dialogue is important in order to create change.

Zika is a public health threat, and one the United States should be taking proactive measures against. The United States is lucky enough to be a developed country that knew about the crisis before it arrived, unlike countries such as Brazil, whose Zika-related health problems were what brought the virus to light in the first place. All we need is a little help from Congress to actually use that advantage in keeping Americans healthy — while also helping those who are being hurt by the virus in developing nations.