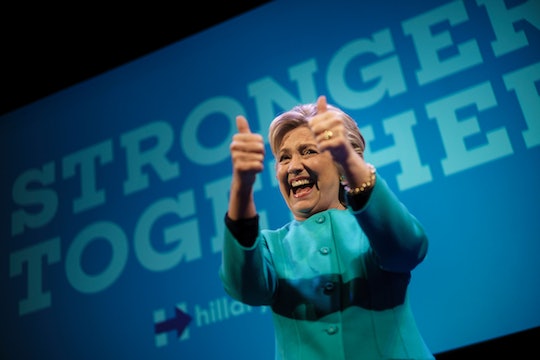 How To Put The Hillary Logo On Your Facebook Profile Photo

The presidential election is fast approaching, and as the last debate showed us all, there are a shocking number of undecided voters still out there, scratching their heads as they try to choose between a seasoned politician and frequent Howard Stern guest and businessman. Woo! OK! Why not help them out by putting the Hillary logo on your Facebook or Twitter profile photo? While some voters are into retweeting, sharing, and all-caps "shouting" about their love for their preferred candidate, there's something to be said for subtlety, and the understated photo overlay is a cool way to to say "I'm with her" without actually saying anything at all.

Adding the logo to your profile is easy; just go to the Twibbon site linked above, click on "Add to Twitter" or "Add to Facebook" (why not both?), and then authorize the app to access your profile. From there, you can work with your current profile photo or select a different photo to work with (whether it's already posted to your profile or not) and then drag to resize or reposition the logo as needed. Get your whole face in that arrow. Show them your righteous voter pride!

Twitter can be a rough place, and this election is only making things rougher, so there's no shame in sticking to Facebook for a while. There are still some fun things you can do there. Why not hop on Trump's page to see how many of your friends like it? Some might instinctively unfriend every one of them (and I don't blame you), but if you're feeling ambitious, you could just make a mental note of it and then make your future interactions a little more targeted. Try to gently nudge them in the right direction. Hey, maybe they've been in a coma since 1992 and they just woke up, heard that the guy from the hotel in Home Alone 2 was running for president, and got on board. Who knows?

But what might be more productive is figuring out who likes Gary Johnson and who likes Jill Stein. So much of the pro-Hillary talk is actually just anti-Trump talk, and she's so much more than just the anti-Trump. People who are planning on voting for Johnson or Stein know their candidate can't win, they don't like Trump, but they still won't vote Clinton. Find out why not. Tell them who she is, what she's accomplished, and why you believe she'll make a great president. Because in many areas, it could come down to a very small number of votes, and voting third party or not voting at all could have dire consequences. Your girl needs you. Get out there and make some noise.