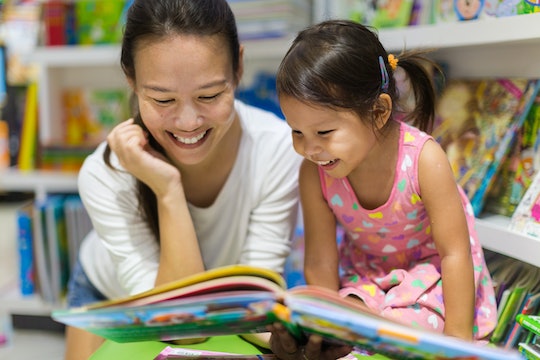 How To Raise A Bilingual Child, According To An Expert

My partner grew up speaking Spanish and English, and his entire family speaks both languages. And while I grew up primarily speaking English, for about a decade, when my sister’s father immersed her in Latvian, I took classes to learn Latvian, too. So we knew, even before I found out I was pregnant, that we wanted — and needed — to learn how to raise a bilingual child. Turns out, it's much easier than we originally thought.

Romper spoke with researcher and language coach, Ana Oliveira, to better understand how parents like me can raise children to speak more than one language.

“Reading is a very good way to promote language development, and the more you expose your child to that second language the better," Oliveira tells Romper. "Creating an emotional connection to a language through a caregiver has been shown to be very effective for language acquisition in childhood."

Choosing a bilingual children’s book to read to your child at night, for example, could help them build a connection with the second language you are encouraging them to learn. Studies have shown that reading to your child can help improve their social and emotional skills, as well as improve their reading comprehension and literacy, as reported by The New York Times. To help your child become bilingual, it's beneficial to read them books in both languages, according to the American Speech-Language-Hearing Association (ASHA).

When asked what parents and caregivers of kids younger than 3 can do to immerse their children in other languages, Oliveira explained that “creating a bilingual environment is always a good idea. Books, cartoons, games, apps (if you allow some screen exposure time), and music are all good strategies to get the child exposed to the target language.”

It's also beneficial to facilitate situations in which your child can interact with a native language speaker, Oliveira says. “Find ways to surround them with native speakers of that language especially around the community," she explains. "Encourage them to make friends with Spanish speakers or be a part of Spanish speaking groups. Having a clear need and opportunity to speak the language is the best motivation for both of you.”

Creating relationships and evoking a positive emotional connection to that second language is always the way to go.

Like any learning process, though, there are barriers and obstacles that people face when learning a new language. For me, sometimes feelings of embarrassment and a fear of sounding ridiculous impact my desire to practice. Oliveira says “the biggest barrier in second-language acquisition for young kids and adults alike is the quality of input and output.”

"Effective input is surrounding your child with age-appropriate materials in the target language and creating the need for natural communication, for instance, by playing with another child that speaks that language," she explains. [Stephen Krashen's Theory of Second Language Acquisition] says that the best method for language learning is supplying comprehensible input in a low anxiety environment containing relevant messages to the person (or child) learning it.”

Oliveira says that, just like when kids are learning how to play a new game, a child learning another language will go "through a trial and error phase before getting the hang of it." It's best to avoid being overzealous, she says, and as a parent you shouldn't demand perfection from your child. Instead, Oliveira says you should simply let your child experiment with this new language, "always focusing on communication over enforcing rules."

While reading bilingual books and listening to music in another language is beneficial, Oliveira says parents hoping to raise a bilingual child will have to take it one step further.

“If you want to raise bilingual children, you have to incorporate that target language into your daily life in meaningful ways,” she says. Oliveira recommends that parents and caregivers make the learning experience an enjoyable one, instead of a chore. “Creating relationships and evoking a positive emotional connection to that second language is always the way to go," she explains. "You can buy your child books, movies, and games in a second language, but if they have no reason to use the language besides that they won't learn how to communicate.”

In other words, parents should practice speaking the second language as often as possible, too. “You only learn how to speak any language if you have the absolute need to communicate with it," Oliveira says. "If you are a second language speaker, speak to your child in your native language. Don't worry."

Speaking of worry, early studies in bilingual research drew a connection between learning more than one language and delays in language learning, such as the acquisition of a robust vocabulary. “That led many immigrant families in the United States during the 1970s and 1980s not to teach their children their home country's language in fear of delaying their language development in English," Oliveira explains. But a 2002 study found that children who learn more than one language are not more likely than monolingual children to develop or be diagnosed with a language disorder, or show delays in learning. Bilingual children might have a smaller initial vocabulary in both languages, but have a larger "conceptual vocabulary" across both languages.

"If you have the means to raise your child bilingual, don't waste that opportunity,” Oliveira says. "They’ll thank you later.”

More Like This
Spread Some Christmas Cheer In Your Child’s Bedroom
20 Stocking Stuffers For Kids Under $20
Festive Mommy & Me Holiday Nail Ideas To Try
101 Advent Calendar Activities, From Books To Read To Cookies To Bake