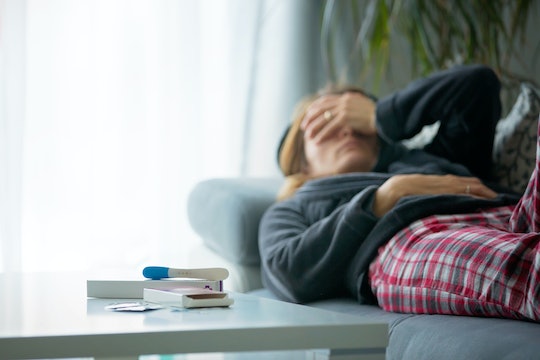 How To Read An Ovulation Test, Because These Things Aren't Like Books

Trying to conceive can be nerve-wracking, confusing, and stressful, especially if you don't feel like you know what you are doing. If you have decided to track your cycle or determine when you are going to ovulate to improve your chances, knowing how to read an ovulation test is an important part of the process. According to experts, they are actually pretty straightforward to use, once you get the hang of it, of course.

According to U.S. Department of Health and Human Services Office on the site Women's Health, there are three main ways to track your cycle to help you know when you should start trying to conceive, which all center around ovulation — measuring your basal body temperature, tracking your cycle on a calendar, and examining your cervical mucus. Over-the-counter ovulation kits can help take the guess work out of this process by detecting levels of luteinizing hormone — the hormone responsible for ovulation. According to the site, detecting these levels is an important, because both eggs and sperm have a pretty short lifespan. In other words, to improve your chances of conceiving you should have sex during the period two to three days before ovulation, to 12-24 hours after. That time frame will give the sperm the best opportunity to meet up with an egg, and at the right time.

According to What to Expect, there are two types of ovulation tests on the market and made available to those trying to conceive — ovulation test strips, which you dip in urine, and mid-stream ovulation tests, that are similar to at-home pregnancy tests. Test strips have two lines — a control line and a test line. If the test line is the same shade or darker than the control line, you will ovulate within the next three days. If it is lighter than the test strip, your body has not released the surge of luteinizing hormone necessary to trigger ovulation.

Midstream tests work exactly the same way, and are essentially read in the same way. The only difference is that you pee on the test rather than dip a strip in urine.

According to the American Pregnancy Association (APA), while ovulation tests can help you conceive, they also have some downsides. Namely, despite their name, ovulation tests measure hormone changes, not ovulation itself. Some people have surges in luteinizing hormone but then don't ovulate, and others have small surges during their cycle, before the big one that actually results in ovulation.

Also, tests are only accurate when taken right before you ovulate and might not be a great tracking method for you if your cycle is not regular. For these reasons, the APA recommends using ovulation tests along with other fertility tracking methods, like using a calendar or app to track your cycle and monitoring changes in your cervical mucus, to improve your chances of conceiving.

More Like This
My Queer Pregnancy Began In A Cold Doctor’s Office, But It Was Also Weirdly Romantic
Pelvic Pain During Pregnancy: What Causes It & How To Deal With It
What Is Acid Reflux Tape? Chrissy Teigen Swears By It
52 Short & Sweet Middle Names For Girls