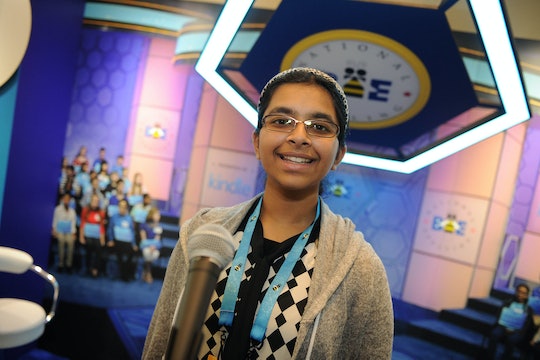 How To Read Smrithi Upadhyayula's Book, Because The Scripps Finalist Is Super Talented

As if making it to the finals of 89th Annual Scripps Spelling Bee wasn't enough, spelling bee fans learned that one of those tweenage spellers had written a book. That's right: 13-year-old Smrithi Upadhyayula has written a science fiction book. Wondering how to read Smrithi Upadhyayula's book, Glitches? Unfortunately, you'll just have to wait until it gets picked up by a publisher.

While the eighth grader from Coppell Middle School West in Coppell, Texas has completed writing Glitches, she's still in the process of editing it. So for now, you'll just have to be content reliving her best Scripps moments. In an interview with The Dallas Morning News, Upadhyayula offered curious readers a brief synopsis of Glitches: "It’s about a girl who figures out she was actually a lost alien princess" and who must flee her home before its destruction. It's no Dostoevsky — but it sounds like it's got young adult trilogy written all over it.

As if one book from this ambitious middle schooler wasn't enough, Upadhyayula told The Sidekick (her school's student newspaper) she's already working on a second book. At 34, I feel woefully unaccomplished — Upadhyayula already has one book with another on the way. How many do I have?

It's no surprise that Upadhyayula would be such a lover of words and eagerly writing her own books. Upadhyayula's Scripps Spelling Bee biography reveals that her favorite book is The Fifth Wave by Rick Yancey — you might remember the movie adaptation starring Chloë Grace Moretz from earlier this year. The budding sci-fi author loves the movie Interstellar, and it would seem her book Glitches falls into line with similar themes of space opera meets coming-of-age tale.

She'll have plenty of time to finish her second book, as Upadhyayula was eliminated in the 11th round of finals Thursday. Her doomed word? "Theriaca" — an antidote for poison made from a mixture of honey and other drugs.

After an impressive performance Thursday night, maybe Upadhyayula will be fielding calls from agents yet.